Continuing our look at manufacturing on the Hill, we turn now brick-making. Remarkably, there used to me many of these businesses in DC, including one on the Hill. I say ‘remarkably,’ as there was little to be gained from having the manufacturing site close to the place where they would be used. Nonetheless, for many years at the end of the 19th and beginning of the 20th Centuries, the Alfred Richards Brick Company was a going concern at N Street SE.

Alfred Richards moved to DC right around the Civil War. Born in Alexandria, he was educated in DC and soon took up brick-making. The bricks were generally know to be “of excellent quality, and not surpassed by any make.” They were “disposed of in the city and the surrounding country.” The brick-yard was on O Street SE, just East of South Capitol Street. Richards himself lived a few blocks away, at 1123 New Jersey Avenue, while his son, William A. Richards lived a block north of the factory on N Street.

Richards seems to have had a preternatural ability to attract bad luck – or, at the very least, lawsuits. When not engaged in lawsuits that turned on some arcane question of how a lien could be applied – questions that ended up being precedent-setting – Richards’s found himself in court due to the activities of two of his barges. According to George H. Sheldon, and quoted in the April 19, 1898 Washington Post, “his schooner was moored at McDonald’s whard, in the James Creek Canal, on August 9 last, when two scows, heavily laden with gravel and belonging to the defendant, broke loose from their moorings at the same wharf and collided with his schooner, the first scow doing much damage and the second causing the Harp to sink.” Sheldon pressed a case of libel against the Alfred Richards Brick Company, though the exact libel that was stated towards Sheldon was not reported. 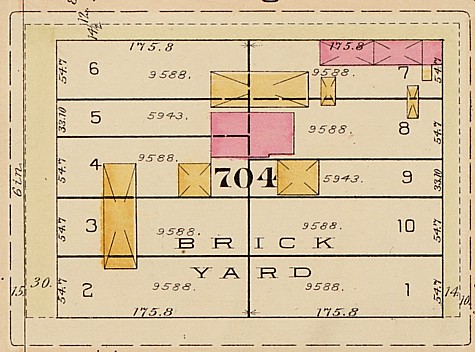 The Brick Yard as shown in the 1903 Baiste atlas of Washington DC. (LOC)

The Anacostia (still generally referred to as the Eastern Branch at the time) was still important to Richards’s business, as the movement of freight on the water was much cheaper and easier than any other method. Richards thus paid for a wharf on the water, renting from the city the wharf at the foot of Q street SE. He cleverly increased the size of his holdings by dredging dirt from the river and depositing it behind a bulkhead.

Richards also dabbled in other businesses, becoming an incorporator of the Anacostia and Potomac Railroad, and later serving on their board of directors. He died in 1894. His business was taken over by his son, William A. Richards, though as the years passed, William moved further and further away from the original work his father had done, eventually working as a contractor.

Alfred Richards was buried in Congressional Cemetery, in the Richards vault, alongside the three wives who had predeceased him.

Today, the location of the old brick business is the north side of Nationals Stadium, while the old wharf is a barren plot of land just south of the Stadium, currently awaiting an entirely new use. If you’re interested in what the old brick kilns looked like, look no further than the New York Avenue side of the National Arboretum.