One if the things I learned when researching my house history book was the number of women who were involved in Real Estate, whether as partners to their spouses, executors of their husbands’s estates, or on their own. At least on the Hill, the concept of the stay-at-home wife who was responsible solely for the household was far from the norm. Thus, Elizabeth Haines, the subject of today’s column, while hardly the norm, was not that far out of the ordinary, either.

Elizabeth Morrison was born in the 1840’s in Ohio. She married Mahlon Haines, and they had three children together, the last just a few weeks before Mahlon, during a buying trip in Philadelphia, died of an accident.

Haines continued her husband’s business, but after two years, decided that she would rather her children were educated in DC. She fell sick herself after wrapping up her store, and spent two years recovering. At this point, she was persuaded to open her own store, and acting quickly, she started a new shop in Anacostia.

Although starting slowly, her business soon grew to the point of her being able to move to a larger building, this time directly on Capitol Hill. Her shop, in the 1200 block of 11th Street SE, soon grew to the point of having to expand. Her first expansion was simply into the next-door house, but by 1891, she needed a purpose-built building. She found a plot of land on the corner of 8th and Pennsylvania Avenue SE, and work commenced there in early 1892. Six months later, “Haines’ Washington Store” opened. It was an impressive achievement, with 15,000 square feet of trading space on two floors, plus a third floor that was rented out by the day. Under one roof were 50 different departments carrying a vast array of goods. An article published four years later described it as “a store with all the modern conveniences, where trading becomes a pleasure instead of a vexation.” 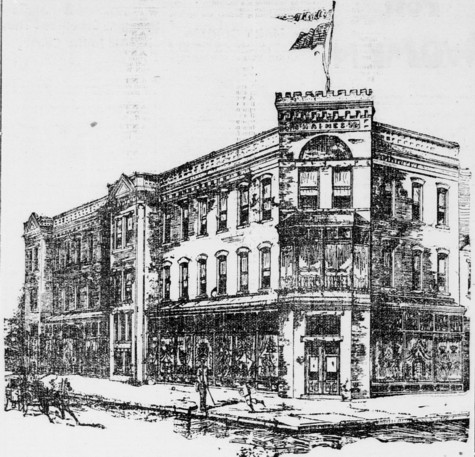 The Haines Washington Store in 1896 (LOC)

Vexatious was only the economy. In early 1893, a series of bankruptcies and bank runs caused a severe depression, whose effects were felt all over the United States, and the economy did not recover until 1897. In spite of this, Haines persevered, and her store survived, even when a fire burned much of the store in 1905. Haines also gave money to causes she believed in, including posting bail for several of the leaders of Coxey’s Army.

Haines and her family moved form 11th Street to Seward Square, living a little less than a block east of J. Edgar Hoover, who was living there with his family.

In 1910, Haines decided to sell her store. It was bought by Milton Ney and Joseph Goldenberg, who sold off most of the stock in a major “reorganization sale” and then, having renamed it the “Haines’ Department Store” continued to run it for many more years.