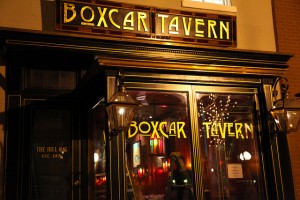 To say that Xavier Cervera has been busy is an understatement.

On Friday, Cervera will open his fifth restaurant on Capitol Hill, Boxcar Tavern, located directly across the street from Eastern Market. The opening marks the end of a busy year for the Capitol Hill restaurateur, and it will usher in another busy one, filled with construction projects, closeout inspections and staff and kitchen preparations.

In approximately four months, Cervera will open Pacifico, serving Latin American tapas on Barracks Row. Meanwhile, at the Southeast Waterfront he is planning to open two new outposts, Park Tavern and Willie’s Brew and Que. Add to that the heavy construction and renovations taking place at the Hawk ‘n’ Dove, and you can already predict he won’t have much downtime in 2012. (We talked to Xavier back in September about some of those plans, and the comments got just a little out of hand.–ed)

But one day before the opening of Boxcar Tavern, a $1.1 million project completed in the last six months, Cervera appears to be calm, cool and collected.

“This one went fairly smoothly. When we open tomorrow, we will be the first gastropub on the Hill serving affordable food to people,” he said

Whether you’re in the mood for a burger or some pâté, Cervera said he tried to put something on the menu for everyone, and the food is moderately priced. One of the higher priced items, a steak, will run a little more than $20.00.

Executive chef Brian Klein is running the kitchen. Klein helped Cervera open Senart’s Oyster and Chophouse earlier this year, and previously worked as executive sous-chef at Brasserie Beck. The menu includes salads and sandwiches, as well as entrée and dinner meals. Diners can expect a brunch menu and late night options too.

At the bar there are 12 beers on-tap, featuring a mix of local and premium drafts, like Flying Dog and Fat Tire, and there are 16 wines, offered by the glass. The bar will be open Fridays and Saturdays until 3 a.m. and until 2 a.m. all other days.

What makes Boxcar Tavern unique from some of Cervera’s other dining establishments on Capitol Hill, he says, is the location and concept.

“I live on this side of Pennsylvania Avenue and we’ve had very few choices for dining and drinking on this side of the Hill. A lot of people don’t want to walk far to grab a drink, so we are offering them a place to come, open at most times of the day.”

Diners who visit will immediately recognize some of the designs that went into the tavern. Two signs from the old Hawk ‘n’ Dove, including the storefront sign, hang in the rear of the restaurant. And, a sign from Finn Mac Cool’s, the former bar that is now Molly Malone’s on 8th Street, hangs by the front door.  Cervera also commissioned an artist to paint a large portrait of Eastern Market, and he has collected a number of tavern signs from historical pubs in Britain, Scotland and France.

The tavern’s name comes from the look and feel of the space, Cervera said. The tavern is housed within a former sandwich shop, Petit Gourmet, which was narrow and small. Cervera knocked out the back wall of the building and more than doubled the space, expanding back to the rear alley. But there was no way to get around the narrow layout. Instead, Cervera arranged tables in a row and created an elongated space that can hold 60 diners at any time.

“The feel of the place is long and narrow, like a boxcar, and the design work has Arts and Crafts trim and a Stickley design.”

The tavern is decorated in wood trim and rich fabrics. Cervera opted to use furniture instead of booths because it fit within the Arts and Crafts theme. He has also placed four flat-screen mirrored televisions for game watching. When the televisions are turned off, they blend into the restaurant and appear as barback mirrors, helping to make the space feel more open and wide. Cervera hopes the bar will attract crowds on game day.

“We are trying to appeal to as many people in the neighborhood as possible. And we’ve worked to offer them something unique to try.”