Keeping cool is today hardly an issue unless, of course, your AC breaks– necessitating an expensive call to your mechanic.  Before Willis Carrier invented this fine piece of equipment, life on Capitol Hill (and anywhere in DC) was extremely unpleasant for anyone stuck here during the summer – something that was most certainly true for those soldiers sweltering in Lincoln Hospital (what is now Lincoln Park) during the Civil War.

Fortunately, there were people who did their best to help – and today we’ll look at one of the devices used to mitigate the heat.

The British were among the first to devise methods for surviving in high heat environments.  Their soldiers and civil servants in India were in desperate need of a little relief from the sweltering heat on the Indian subcontinent. Unfortunately, their methods usually required a servant to propel them; thereby, these methods could not be employed in other parts of the world.

Fortunately for the soldiers recovering in Lincoln Hospital, a Dr. Charles Sabin Taft came to the rescue: He devised a method for fanning that relied on a pendulum. One fan could be mounted above each bed, and each of them connected to a pendulum, which was heavy enough that it would keep swinging for a long time.

Thus, a single push by one of the attendants would keep the fans swinging, and air moving, for a long stretch leaving the soldiers marginally less distressed and more able to concentrate on their recovery.

Dr. Taft — whose father, Judge Horatio Taft, was a patent examiner — became a footnote in history when he was one of the first to assist President Lincoln upon his assassination. He was boosted up into the presidential box, then remained with the President until his demise the next day.

Taft’s fan invention was never patented, though a Dr. Daniel J. MacGowan, a noted expatriate doctor who had returned from long service in China to work as a surgeon in the Union Army, did write it up in the hope that someone would give Dr. Taft some money for his work.

In case your AC ever goes out, I am posting a sketch of the invention to help you build Dr. Taft’s invention. 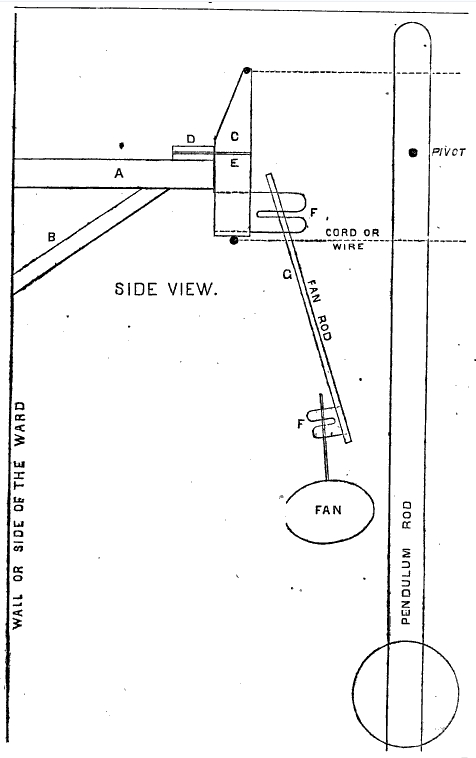