Hine Design Concerns Mount, But Not Insurmountable to ANC6B 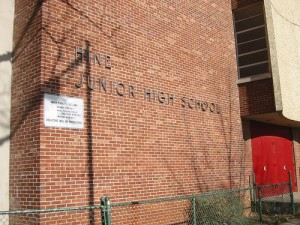 Uploaded to Flickr by Bill on Capitol Hill from his photostream

At a special call meeting Tuesday night, ANC 6B voted 6-3 to approve a memorandum that development partners Stanton/Eastbanc should make various aesthetic design changes to the  proposed Hine School site, clearing the way for a decision by the Historic Preservation Review Board June 30th on key architectural plans for the square block project.  ANC 6B said its resolution back in April remains its guiding position and supports the project contingent on it, coupled with recommendations about the altered design.

The April resolution called for tweaking of the design, reduction in massing of the above grade structure via increasing subterranean space and hiding or reducing the size of the mechanical rooms, among other things.

Voting against the new memorandum for the project, which encompasses a full square block for the site across from the Eastern Market Metro, the open plaza area, as well as facing the 7th Street, SE, business corridor and the 8th Street and D Street residential areas, were Commissioners Norman Metzger, Kirsten Oldenburg and Dave Garrison.

New recommendations responding to the altered design ranged from increasing the size of creative window surrounds “to include lintels, sill, sashes  and hoods” on the 8th Street Residential Buildings, to a full  reconsideration of the modern, concrete D Street Residential Building structure.  The memorandum cited that structure as too reliant on square geometries and pattern-making and, therefore, not consistent with the area’s aesthetic. The architect, Amy Weinstein of Esocoff & Associates, said she liked a little variety and there was room for a modern flourish.

Additionally, the 7th Street Office Building should be as lively as the storefronts across from it, and the 7th Street and Pennsylvania Office Building should have a reduced penthouse building where the mechanical/cooling systems are located, the ANC6B said, noting that a new design setting it back to reduce size and massing now exposed it to the street-level viewer.

ANC 6B still feels its concerns about the interior courtyard have not been addressed. The Commission strongly supports retention of the interior courtyard as a public space, while plans have it as a private, gated area, and possibly reduce or regrade its size and structure to reduce massing of the building elsewhere.

The HPRB will be considering only the 8th Street Residential Building, the buildings along Pennsylvania Avenue, and the Seventh Street Office buildings on June 30th. The buildings along C Street between 7th and 8th (both north and south sides of the street), and along the plaza will be considered at the July HPRB meeting, according to a note from the Capitol Hill Restoration Society posted on Metzger’s website. Officials had punted on the architectural plans presented in the spring, and HPRB had ho-hummed at an early iteration of the design, with commentary, sending Weinstein back to the drawing board to address concerns that the facade was too Disney-esque. The new version took its cue from terraced housing in Bath, England, as well as revered Victorian blocks of related buildings in historic neighborhoods, from Dupont Circle to Georgetown to Stanton Park to Lincoln Park.

Leonard Hacker, a longtime neighborhood development activist, former ANC commissioner and a historic neighborhood aficionado thinks all the recommended changes do not suffice; an opinion echoed by neighbors at a recent meeting.  “My reaction is simple, they are not representing the wishes of the people that elected them, and that will be taken care of at the next election or possibly a recall petition.” He is dead serious. He and others who spoke forcibly on the issue simply do not think the buildings are aesthetically favorable or compatible with the surrounding buildings, and compatibility is a key component of the  HPRB’s  guidelines. The  proposed buildings, about six stories high, are still too high for him and others.  Hacker noted that all the examples Weinstein presented were  four stories or less, and that the project simply doesn’t comply with many HPRB guidelines.

Meanwhile, at a long meeting unveiling the plans the prior evening at Stanton’s office, a group of neighbors and interested parties spoke loudly and interrupted the presentation multiple times to object to the revised look on the grounds that, despite new use of materials and angles and contours and reductions in height, in some areas it was still too big, too imposing, too monolithic.  It garnered comparisons to old-style government punch cards with the window uniformity, and to Socialist architecture, while even offending the soul, although that was an indirect translation from another tongue.

Some community members struggled to state their feelings about the building in as polite words as they could muster; others did not.

Close-in neighbors, in general, are opposed to  the six-story height of the building, with a seventh housing cooling systems and the like. They argue the building’s size and scope is unprecedented in an historic neighborhood here, no matter how much Weinstein took pains to make it fit in with Victorian features, or add visual interest with masonry sleight of hands and patterns, such as is found on her Home Health Care-tenanted  building on 7th Street SE.  Nor do they like the concrete modern facade of the office abutting 8th and D Streets SE.

Nearby residents worried the Hine building as planned now by Stanton would create a cavern where Eastern Market is, dwarfing their homes and blocking natural light in its massiveness; something that would change the nature of the Eastern Market area “forever.”

Ken Golding, Stanton Corp.’s principal, argued that smart growth calls for density around Metro stops and that he was taking his cue from other projects in other cities calling for “transit-oriented development,” and noted the plan preserves the Flea Market vendors and creates needed density.

The RFP contract with the city requires certain square footage:  if the building is taken down a floor, as neighbors would like, or a gap or passageway created between the frontage on Pennsylvania Ave., SE, space would then have to be created  elsewhere.  This could conceivably mean eating into the courtyard, which raises aesthetic and quality of life issues with future tenants and residents, or by digging further underground, which is costly.

The original proposal accepted back during the Fenty Administration had gross floor area square footage above grade at 427,600 gsf.

As one neighbor fighting the project as proposed said, “there are many twists and turns to this project before we get to financing.” Opposition to the design element is the first major hurdle Stanton/Eastbanc must overcome — there are major zoning variances needed, commitments from major tenants before a loan is given for financing, the PUD process must be faced, traffic light issues need to be sorted out, and the like.

One Hill resident worries that the site will linger if the project falls through, becoming another great Washington, D.C. unused space languishing in the city — or become a bus parking lot.

The project is not due to be completed for several years. The proposal from Stanton-Eastbanc back from 2009 is on Stanton’s website but the timeline formerly there was not  immediately found.

34 responses to “Hine Design Concerns Mount, But Not Insurmountable to ANC6B”