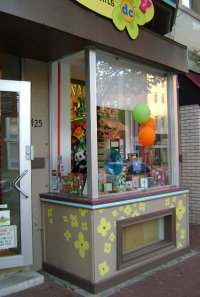 The neighborhood is looking for news on Groovy dc Cards and Gifts ever since a stroll down Barracks Row at noon Monday revealed that the pleasant, tidy and bright shop — a personal favorite of mine–  had its windows covered with brown paper, and a U.S. Marshal at its doors looking for the owners and saying, “I thought they were here.”  The U.S. Marshal declined to speak with  me outside 425 8th Street S.E. as he talked furtively into his phone, but a source said he was serving an eviction notice.

An hour-plus later, the Marshal and the brown paper were gone, and all that remained in the store was a broom against the far wall and the large orange and brown painting that hung behind the cash register area. There have been hints of landlord-tenant issues for some time but I am waiting to hear more from the owners, who appeared to be good neighbors.

Manuel and Dennis, Groovy’s owners, are a dynamic duo who give generously to local schools  and who are great to visit with when one drops by to get a card, a birthday present, or a treat for a tot; or a unique adult gift items. They could not be reached Monday by email or phone, Twitter, or, of course, by drop-in.  (Manuel, please let us hear from you!)  Groovy’s owners have wrapped countless presents for many a Hill kid, and I think a photo of myself and my then-baby was featured in the Hill Rag’s store opening coverage.  (There was a clown, so my older child had fled.) My kids look for Groovy when we pass by, so we’d like to know where they will set up shop next.

They had been planning  to  announce their move to a new location as early as Monday, they told me last week when I stopped in at the then-fully-stocked store.  The place would be bigger but still on the beaten path, they said. Lease negotiations were still being worked out.

Groovy originally moved to the block in 2006, when they were in the signature blue painted Victorian across the street; this spot now hosts a salon. In 2009, Groovyland, the toy store, and Groovy dc merged; the cards, including our signature Maury Elementary student notecards and other cards by local artists, were moved to the front of the petite store.