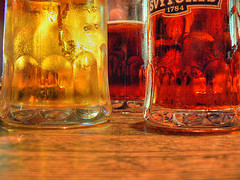 I was unable to attend Tuesday’s ANC6B meeting (I’ll go back to my live tweeting next month), but EMMCA and JDLand both have the goods on the exciting agenda items: the ongoing saga of bars and restaurants.  The Cliff’s Notes version is that Nooshi and Moby Dick’s voluntary agreements have been approved so they can now move forward on their plans; the Barracks Row neighbors who call themselves “Capitol Hill United” (which I think our poll states otherwise…) are continuing to protest plans for Pacifico; and the Bier Garden’s designs have been approved by the commission…mostly.

First up, the ANC and the owners of Nooshi and Moby Dick have settled on a voluntary agreement.  David Garrison was the only commissioner to vote against the agreement, stating that the number of seats in the restaurants is still too high and the issue of an over concentration of bars and restaurants on the stretch has still not changed.  The neighbors who were opposing the licenses have withdrawn their protests.

In regards to Xavier Cervera’s plans for Pacifico, EMMCA’s Larry Janezich reported that “The protesting neighbors, organized as The Hill United by Yoonmee Chang, Helene Quick and others, stated that they would continue to protest a liquor license for Pacifico, the new restaurant proposed by Xavier Cervera for the location now occupied by Capitol Videos.”

The Bier Garden proposed for lower 8th Street passed the licensing hurdle last month and is now onto the Historic Preservation Review process.  JDLand has the renderings, which include a one story building and roof deck in addition to the summer garden. JDLand explained that the commission voted to approve the designs (after what sounds like a LOT of deliberation) but they also decided to send a letter to the the Historic Preservation Office “detailing the commission’s concerns about safety on the roof deck, the design of the doors (too stubby, Oldenburg says), the “parapet” that is above the front door, and the design’s “historic character.””

To give you a taste of how fun these meetings can be (as well summarized by JDLand):

There ensued much discussion, with the bulk of concerns coming from Kirsten Oldenburg (in whose SMD this is) and David Garrison, who both clearly are unhappy with the design, especially the roof deck. (Perhaps Kirsten will write more about this project on her blog so I don’t have to try to summarize, HINT HINT.) But other commissioners made clear their desire to get something built on this portion of Barracks Row south of the freeway to help jump-start the area.

After an initial motion to oppose the designs while the applicant and the city’s Historic Preservation Review Board continue to make refinements failed 3-7, a second motion to take no position failed 4-6, followed finally by a motion that passed 7-3 to support the designs…

Thank you, Jacquline, for your thorough coverage of this!  You can read her full post here.  Kirsten Oldenburg explained her opposition to the designs on her blog this morning.

EMMCA’s Larry Janezich explained the reasons for the failure of the first two motions: “The delay was strongly opposed by Planning and Zoning Chair Francis Campbell, who said it was “unconscionable” to have had the owner come back with design modifications and letters of approval and then raise objections to the design.  Commissioners Green and Frishberg joined in opposing the motion, the first on grounds that the objections to the design issue were subjective, and the second because the reasons for sending the owner down a path requiring further revisions were not clear. ”  You can read Larry’s full summary of the debate here.

Finally, for those of you who do not follow JDLand or the happenings of ANC6D, there is another beer garden planned for closer to the stadium, which will be run by the folks behind The Bullpen.  JDLand has the details here.

And I know feel like I owe both Jacqueline and Larry beers for sitting through and summarizing that back and forth for me!

One response to “ANC6B Meeting Recap”