greenHILLhome: Funding for Solar in DC Gets Cloudy 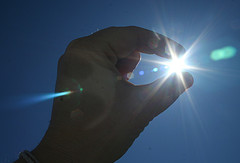 uploaded to flickr.com by onlinewoman

Several months ago I wrote about the basics of solar energy on the Hill, the options for funding and the benefits of the Capitol Hill Energy Co-op.  In 2010, more than 40 Co-op members completed installations on their Hill homes and another 20 signed contracts for installations in 2011.  Fifteen other co-ops were formed in neighborhoods throughout DC, and together then formed DC Solar United Neighborhoods or DC SUN.  DC SUN has united to promote solar energy education and to lobby the Office of the Mayor for increased funding and support to photovoltaic projects.  With the city budget needing some serious trimming, though, total funding for the DC Rebate program is in jeopardy.  That doesn’t mean residential projects won’t get funded, but it may mean smaller rebates in the coming months.

Mike Barrette, Solar Project Director for the Capitol Hill Energy Cooperative, gave me an update on the DC Department of the Environment (DDOE) funding status and how it relates to the overall city budget.  The original Renewable Energy Incentive Program (REIP) set aside $8 million over four years (2009-2012) to provide rebates to DC residents.  A homeowner who wants to receive a rebate for a solar energy project goes through the application project and then, due to a yearly rebate cap of $2 million, either receives a rebate as a percentage of the project construction cost or sits in a queue and waits for funding to come available in a following year.  In the current fiscal year 168 projects receive rebate grants, while another 300 are on the waiting list for funds.

Fiscal year 2011 wasn’t so kind to DC, and now the City Council is trying to trim spending and balance the city’s budget.  As of January 5, DDOE reports $618,695 left in the REIP for the fiscal year that has not be awarded to residential solar projects.  The Council has voted to eliminate this funding in its efforts to balance the budget.  The money for the program, however, comes from a “trust fund” set up with electricity ratepayer surcharges.  If the money was collected for the intent of funding the solar energy program, how can the Council “take” the yet-to-be-granted money?  And does that mean that the $2 million slated for fiscal year 2012 is also available for “trimming?”

While the prices of solar panels have dropped considerably in the past few years, the overall cost of a residential photovoltaic system still can run between $20,000 and $35,000.  Losing the DC rebate and with the potential for reductions in federal rebates and incentives, payback for solar energy systems may slow from up to four years to up to eight years.  DDOE has agreed to administer the REIP through 2012, but if the funding is cut moving forward each project awarded a grant may receive less money in the coming year than in years past.

If you are interested in installing a solar energy system on your home, you should seriously consider starting the application process for the REIP grant and getting placed on the waiting list.  The REIP was always run as a first-come, first-served program with a constant waiting list, but with less funding available it would be best to get on that list soon.  Should the funds be depleted before your position on the wait list, you can always remove yourself from the list and proceed with the installation if the economics of the project still work for your household.

For more information, join the DC SUN list serve via the Capitol Hill Energy Co-op website.  You can also contact your City Council representative to ask whether he or she supports the REIP.

6 responses to “greenHILLhome: Funding for Solar in DC Gets Cloudy”