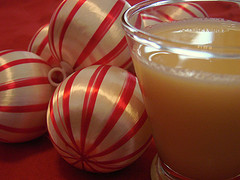 We’re just days before Christmas.  Got the presents wrapped? Tree trimmed?  Menus planned?  Food always played a big part in the Christmas and New Year’s traditions in my home growing up, and I thought it might be interesting to find out what foods or dishes are cherished by our neighborhood chefs and restaurateurs.  This week, THIH will be bringing you recipes from the chefs at Hill restaurants–consider it a little gift from your friendly neighborhood blog to you!

Today’s recipe will warm you from the inside thanks to Wisdom’s cocktail guru Erik Holzherr.

Erik: “I had just turned 22 and was home from the Air Force Academy and was quite parched. I raided my parents’ liquor stash and uncovered a dusty bottle of magic and mystery from the back shelf.  My mother later explained that this was aguadiente from Colombia – a strong anise flavored liquor that she had sworn off after a bad experience when she was 16. (The result was my older sister).  Anyway, my younger sister (Val or “Sweet V” – now head bartender at Wisdom) and I experimented with the “fire water” all night. I woke up on the kitchen floor Christmas Eve morning realizing I was a genius.  It became a family classic after that and was eventually perfected and named “the Colombian Necktie” which is now served at Fruit Bat [on H Street NE].”
1.5 oz. Banana rum
.5 oz aguadiente
2 oz fresh squeezed orange juice