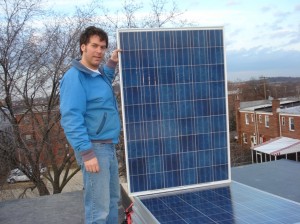 Terry Meier with one of his photovoltaic panels during installation. Photo used with permission from Terry Meier.

We’ve covered the basics on how solar photovoltaic systems work, the tax incentives and rebates available, and the local Co-op working for solar power world domination (okay that’s a stretch but they are working hard at making it possible).  In this last installment (for now), we’ll visit with a couple more Hill residents who have installed solar energy systems and find out the early results of their work.  We’ll also touch briefly on some other renewable energy options that may be a reality in the near future for Hill residents.

Terry Meier has had an operational photovoltaic system on his roof since the end of January.  He did his research, joined the Capitol Hill Energy Co-op, and installed a 4.8 kilowatt system — 24 panels total — with the intent of providing 1/2 to 2/3 his annual energy use.  Their estimated annual energy use is about 10,000 kilowatt hours per year, with monthly usage being highest in the summer due to air conditioning.  Since January Terry is proud to report his solar energy system has been producing more energy than his house has consumed, and his meter is running backwards so-to-speak.  His energy bill has been $0 since the installation, though he anticipates some energy costs as the weather is heating up quickly this month.  His excess energy comes back to him as credits on future months’ bills so he’s got a cushion going into the summer months.  After 6 months of monitoring performance, Terry anticipates a 64% reduction in his energy bills for the year.

The “icing on the cake” as Terry puts it has been the Solar Renewable Energy Credits, or SRECs, offered by Pepco.  The power company can “purchase” the renewable aspects of the solar array to help them meet their requirements to produce electricity using renewable energy.   So, combining the federal tax credit, the DC solar rebate program, the SRECs, and the energy savings, Terry anticipates his roof-top system will pay for itself in less than four years!

If you are still on the fence about installing a photovoltaic array on your roof, consider this and the previous case study as early-stage success stories.  Prices for solar panels will continue to decrease as the technology becomes easier to produce and more prevalent.  While the DC rebate program was again funded and the federal tax credit is still valid, these options may not be around for the long-haul so consider your risk tolerance for losing the incentive programs.

Not sure you want your roof covered with solar panels?  Fortunately there are other options for using renewable energies.  A solar hot water system uses a series of glass tubes to heat water using the sun, circulating the water into an insulated storage tank elsewhere in the house.  The solar hot water assembly is generally smaller than a serious photovoltaic array, and can be sized to accommodate partial or full domestic hot water use.  Another option: Washington Gas has a program with Clean Currents that allows users to switch their energy production method from coal (very prevalent in this area of the country) to wind.  The offsets may allow the residents to lock in a low energy rate and provides support to wind farms, which reduces the carbon emissions from energy production.  Energy use is still billed through Pepco, so the process can be a little confusing but the potential for environmental benefit is there.