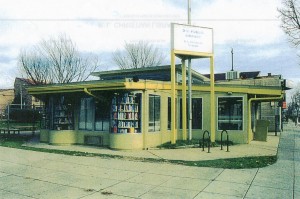 Perhaps you’ve overlooked it or you’ve seen it and wondered about the octagonal glass structure that looks like the “storefront takeout” version of a library.  To me, it always seemed more like a flower growing in a sidewalk crack – a tenacious outpost bringing books and programs to residents who would not otherwise have convenient access to a public library.  The R.L. Christian Library on H St, NE at 13th was actually opened as a temporary kiosk in 1982.  Like many things in government, though, temporary turned into almost 30 years — the site was closed on July 30th of last year.

Now the question becomes: how will this high-traffic street corner be redeveloped?  The District has some (very) short term plans, but a long-term use seems to be a long way off.

At 10,800 sq ft, this is a significant size parcel opening up on a street with lots of development momentum.  The kiosk is only 1,400 sq ft, so much of the space is open (though some apparently contaminated by a former dry cleaners – something any new owners will have to remediate).  Representatives from the District’s Office of Planning and the Office of the Deputy Mayor for Planning and Economic Development addressed a community meeting last night at the Sherwood Recreation Center to present some short-term plans and longer-term concepts for utilizing the space.

As a first step, next Saturday, May 22nd, the city is planning an H Street Kiosk Clean-Up day.  Volunteers are invited to come to the kiosk at 1300 H St, NE from 10am – 2pm to pitch in on tasks like painting, cleaning the interior, sprucing up the landscaping and doing some basic repairs with tools and supplies that will be provided.

The Clean-Up is in preparation for the kiosk’s use during Digital Capital Week.  This 10-day festival, modeled on Internet Week NY and Fringe Festival,  spans June 11-20 and is focused on technology, innovation and all things digital arts.  Events take place all over the city, but the focus for the kiosk is to create a Pop-Up Lab as a location for workshops and networking.  Specific ideas proposed are a pro-bono consulting lounge, performing artists clinic and projects for kids.  Early reaction has been skeptical in some camps, though it seems last night’s meeting was the first time many people were hearing a comprehensive plan.

After June 20th, plans are less concrete.  The District has applied for a grant from the National Endowment for the Arts for a project they called “Interactive H Street”.  It would be a one year project to fund arts and cultural activities.  The entire corridor would be included, but plans for the kiosk may include serving as a temporary hub for community design activities like art installations, a touch screen map, a temporary incubator for entrepreneurs (giving priority to neighborhood residents, arts businesses and projects supporting the corridor), and as a launch point for digital portals like broadband Internet.

The process for permanent site development is only just beginning.  At the end of May, the District will announce it is seeking solicitations on the disposition of the land.  Over the next several months there will be more community meetings, requests for proposals, hearings, comments, responses, and so on.  Representatives from the District did share a conceptual drawing to demonstrate what type and size of building could be put on the site.  So it could still be many months before the community has an idea of what may become of the site.