On Saturday, The Hill is Home’s very own Elizabeth Festa had an article published in the Washington Post real estate section about Gessford Court. She describes the joys of living in this oasis in the middle of the city, and talks to current and former residents about their lives there. Unfortunately, the Post only afforded a small amount of space to discuss the history of this alley, so today – and for the next 2 weeks – I will be looking Gessford Court’s storied past.

Gessford Court was not always a quiet oasis preferred by singles and childless couples. It began in the late 1880s as a rowdy alley that was notorious for the number of altercations that took place there. Such events caused much distress to the neighbors – at least those neighbors who did not look upon them as entertainment – and created extra work for the policemen patrolling the area. Although originally without a name, the area was given the name Tiger Alley by those who lived in the neighborhood. The name, meant to highlight the unsavory nature of the alley, was eventually given official imprimatur by the city.

The source of all Tiger Alley’s reputation was two small – 300 square feet – wooden frame houses built in 1886 by an Annie E O’Neill. The houses were rentals, and their tenants gave Tiger Alley its name.

An article in the aptly named Daily Critic of September 20, 1890, with the colorful title “Tiger Alley: A Resort in Southeast Washington That is the Scene of Frequent Brawls” gave the gory details:

Respectable white and colored people residing in the vicinity of this alley have had their rest so often disturbed by nightly brawls in these houses that they have asked to have them torn down and the nuisance abated. They are said to be owned by a colored policeman.

The attention of the authorities will be called to the noisy and turbulent character of parties who are allowed to occupy the premises, where shrieks of women, coupled with the oaths of men, are frequently hear. Wednesday night last, at about 10 o’clock, for squares around, cries of murder were heard emanating from these houses, which attracted a crowd of persons to the scene. A man blew a whistle and the police were promptly on hand. The patrol wagon took the disorderly characters to the station.

The fights were not the only unpleasant feature of the alleys, as they were also not well cleaned, causing all sorts of filth and muck to pile up, creating an olfactory disaster. Tiger Alley was hardly the only alley in the city that was loud, smelly, and dangerous and soon calls were heard for something to be done. In 1892, therefore, a bill passed Congress forbidding new dwellings to be built in alleys. By this time, however, Charles Gessford had already built a row of ten simple brick rowhouses in the alley, numbered from 1 to 19, while Martin Wiegand had erected two more, numbers 16 and 18. These were allowed to stay. (It helped that the alley had previously been connected to the sewer system; the lack of proper sewerage was a main reason that alley dwellings had fallen into such disrepute.) 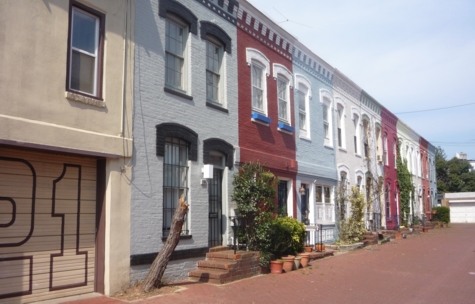 Charles Gessford was one of Capitol Hill’s most prominent builders. He constructed the famous residences known as Philadelphia Row on the 100 block of 11th Street SE, as well as numerous others nearby. He is known for having built more houses on the Hill than anyone else in the boom years from 1875 until his death in 1894, leaving behind a vast quantity of houses that continue to define the appearance of Capitol Hill to today.

Shortly after Gessford’s death, and in hopes of quieting the alley, its name was changed to Gessford Street, and eventually, Gessford Court.

Over the next weeks, we’ll look at some famous events, residents, and visitors to the Court.