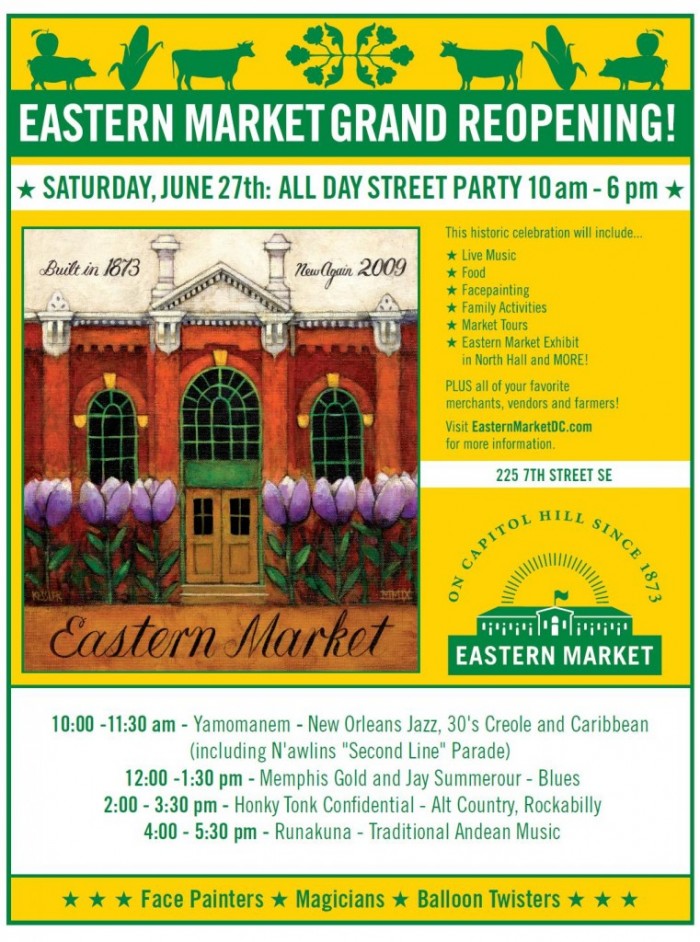 Despite having practically learned to walk at Eastern Market, I recently realized that I knew very little about the Market’s history.  Thanks to some training to be a docent at this weekend’s grand re-opening, I now feel like a walking Wikipedia article on its amazing history and restoration.

Eastern Market was one of three markets in the original L’Enfant plan for the city.  It was first opened near the Navy Yard, on 6th Street SE between K and L Streets, in 1805.  In 1873 the market moved to 7th Street into the South Hall, the main part of the building that is now a historic landmark.  Reasons for the move are not clear but most theories point to population shifts around the city.

The South Hall was designed by Adolf Cluss, a German-born American immigrant who designed 80 building in D.C., including two other public markets: the Center Market which was demolished in 1932 and is now the site of the National Archives; and the Alexandria, VA market house and city hall, which is still in use as the Alexandria City Hall.

The Center and North Halls of Eastern Market were designed by Snowdon Ashford, Inspector of Buildings of D.C.’s Office of Public Works, and built in 1908.  In 1931, the Farmers’ Line (the large covered structure outside of the Market on 7th Street) was built to provide shelter for outside food vendors.  Due to depression-era budgets, the original design was passed up for a simple metal roof.  That roof remained until 2004 when the city replaced it with the structure that exists today.

In 1929, with business down, there were not enough vendors to fill the entire building so the North Hall was transferred to the Fire Department for storage.  At that time, there was a fire station in the area that is now the Aquatic Center.  By the 1950’s, Eastern Market was the only City Market to have survived declining business and competition with the birth of supermarkets.

In the 1954, Charles Glasgow, Sr., who ran the fish market at the time, assumed management of the market in an effort to save it from possible closure.  A fun note here: the fish market is still run by the same family!

In 1964 the Market was designated a D.C. Historic Landmark, and was listed in the National Register of Historic Places in 1971.

Over the years, renovations were done as needed with whatever money could be allocated, but were rarely done to the standards needed or with historical accuracy in mind.

Between 1997 and 1999 Councilmember, Sharon Ambrose drafted legislation that defined how the Market would be run.  At that time, the North Hall was managed separately, by Market 5 Gallery and Kumba Center, and the Center and South Halls were managed by a separate entity.  Under Ambrose’s plan, both would run under the same management.  Additionally, an advisory group, the Eastern Market Community Advisory Committee (EMCAC) was created to advise the city on regulating, improving, and renovating the Market.

EMCAC’s recommendations for a massive renovation project were nearly complete when fire destroyed the market building.  As devastating as the fire was, it gave the city the opportunity to revisit the renovation plans and rebuild the building to the highest standards, and to historical accuracy to highlight the significance of the city’s longest-run public market.

Eastern Market had long been the unofficial center of the Capitol Hill community.  With the fire came tremendous outpouring of support for the businesses that were housed there for so long.  Community members rallied to raise more than $450K to help the businesses through the transition into a temporary building, and through the rebuilding process.  Thanks to those efforts, all of the vendors that were in the old building are returning this weekend.

Renovations include windows that are tinted and UV protected to provide a natural light that is optimal for food display, as well as energy efficient since it will allow in less heat from the sun; sky lights to let in more natural light, which are also equipped with fans to help maintain a comfortable temperature in the market with minimal energy use (many will remember how uncomfortable the temperature was in the old building); an HVAC system; multiple bathrooms; restoration of the doors between the North, Center, and South Halls; ADA compliant entrances; all paint colors match historical designs; a new pottery studio to replace the old one; and a sprinkler system to hopefully prevent any future disasters.

This is just a fraction of the details that make up the Market’s history.  Come by this weekend for a tour to learn more about its history and renovations.  Along with tours (most of the docents are long-time Hill residents who can tells many great stories, along with sharing history), there will be a photo exhibit with pictures of the market over the years, as well as an exhibit on the fire.  And if you get tired of a long history lesson, there are plenty of other events planned.

One response to “Eastern Market, A History”