Nothing says spring is back in DC like our annual Bike to School Day. You can keep your tourist-laden cherry blossoms, I’ll take our local celebration of something that makes Capitol Hill one of America’s best neighborhoods to raise children. It’s something we often take for granted: the ability to easily bike to school.

After a long, cold winter, it’s a relief to ditch the hat, the gloves, the scarf, the shoes…are you KIDDING me?! You lost you boots again!?! We JUST bought those. Do I have to staple them to you? But I digress…

Bike to School Day is a chance to meet up with old friends. It’s a chance to see your daughter’s friends from playschool almost decade ago, growing up. It’s a chance to break down the silos of your child’s school and interact with kids and parents from across the Hill. And it’s a chance to compare notes with new parents, to feel the vibe of the great community that is Capitol Hill, best neighborhood in DC (suck it, Columbia Heights!). So I hope I see everyone tomorrow morning at Lincoln Park where we’ll be celebrating our 4th Annual Bike to School Day.

Bike to School Day grew out of the equally popular Walk to School Day in the fall. Both are organized nationally by the Partnership for a Walkable America, and locally by the irrepressible Capitol Hill Public Schools Parents Organization. They are supported by the DC Department of Transportation’s Safe Routes to School program, who’s coordinator, Jennifer Hefferan, is a model for an engaged public servant committed to improving how our children arrive at their place of learning.

But in the many, many years I’ve been participating in Bike and Walk to School days, a nagging frustration has grown. It’s not the day itself. Rather, it’s the day after. And the day after that. And the year after that. We’ve had mayors come; council members are a dime a dozen. We’ve had the Secretary of Education. We’ve have the Secretary of Transportation. We have plenty of high visibility politicians, and god help us all in an election year.

But then nothing changes. The lights are still not timed for children. The signs fall into disrepair. The curb cuts still aren’t fixed. The one way streets are still one way. We get used for a photo op, while substantial improvements fall into the District’s study hole.

Let me share with you what I see every day. Let’s start near my house at Stadium-Armory metro stop (no, I’m not giving you my address!). You’d cross the street on what was, until quite recently a crosswalk, but was painted over in the most recent “improvement”.

I hope you’re not in a wheelchair, as the curb cut is only for people crossing A Street SE, not 19th. Doesn’t matter much, as there’s a telephone poll in your way.

The thing is, the crosswalk on 19th Street never did much good in the first place. Why would it? The street is clearly designed for cars to go fast, not for people to cross. 17th and 19th SE and NE have long been one way streets, south and northbound respectively. Their job is to get Maryland commuters through our neighborhood as quickly as possible, and have a dramatically different feel than nearby 18th and 16th. Streets. 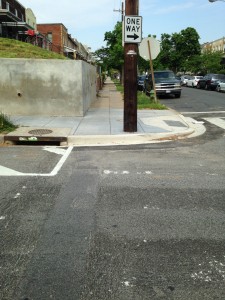 I could have sworn we used to have a crosswalk here.

Neighbors have long asked for traffic calming, and we were promised that they would be reverted to two way streets once the 11th Street bridge project was completed. However, this was merely in public meetings, and I was too naive to get any government official on record with this. New folks in DDOT were all ¯\_(ツ)_/¯ about traffic calming on these two streets and we had to start from the ground up.

It turned out, any attempt to calm traffic on 19th was stripped away in the plan, with only a few sharrows painted on the road, presumably to help motorists aim for the bicyclists. 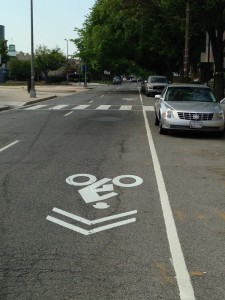 Meanwhile, 17th Street will be narrowed down to a single lane, but keeping the dangerous one way configuration as well. Doesn’t really matter, as construction was delayed until 2016 anyway. And despite DDOT’s promise of monthly updates, our ANC commissioners have heard nothing. At least mine hasn’t, and I know her pretty well. So some day, the tepid and watered down traffic calming we were promised a decade ago will happen, in roughly the same amount of time it took to plan and build the Panama Canal. 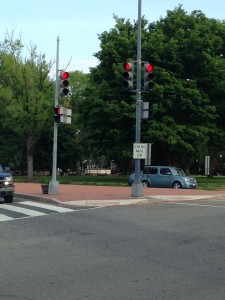 Once we safely navigate 17th Street, we continue down the neighborly A Street, noticing the comparative quiet of two way streets. We come to Lincoln Park. We also see the sidewalks change from concrete to brick, signifying the beginning of the historic district. Fortunately, this triangle is blissfully free of any bikeshare that could cause my children to run out into traffic.

But let’s move on. 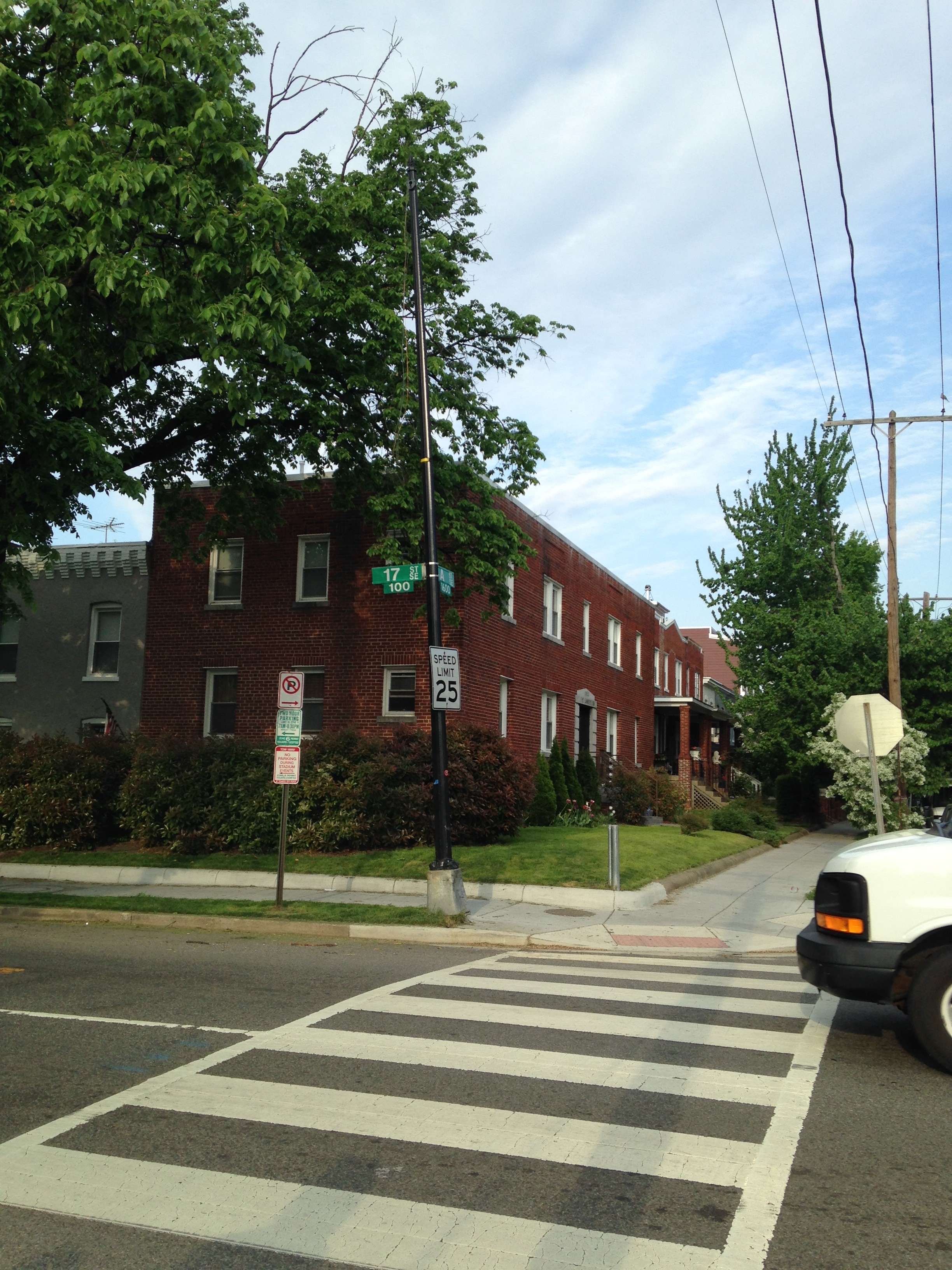 But hey, we got a new streetlight! 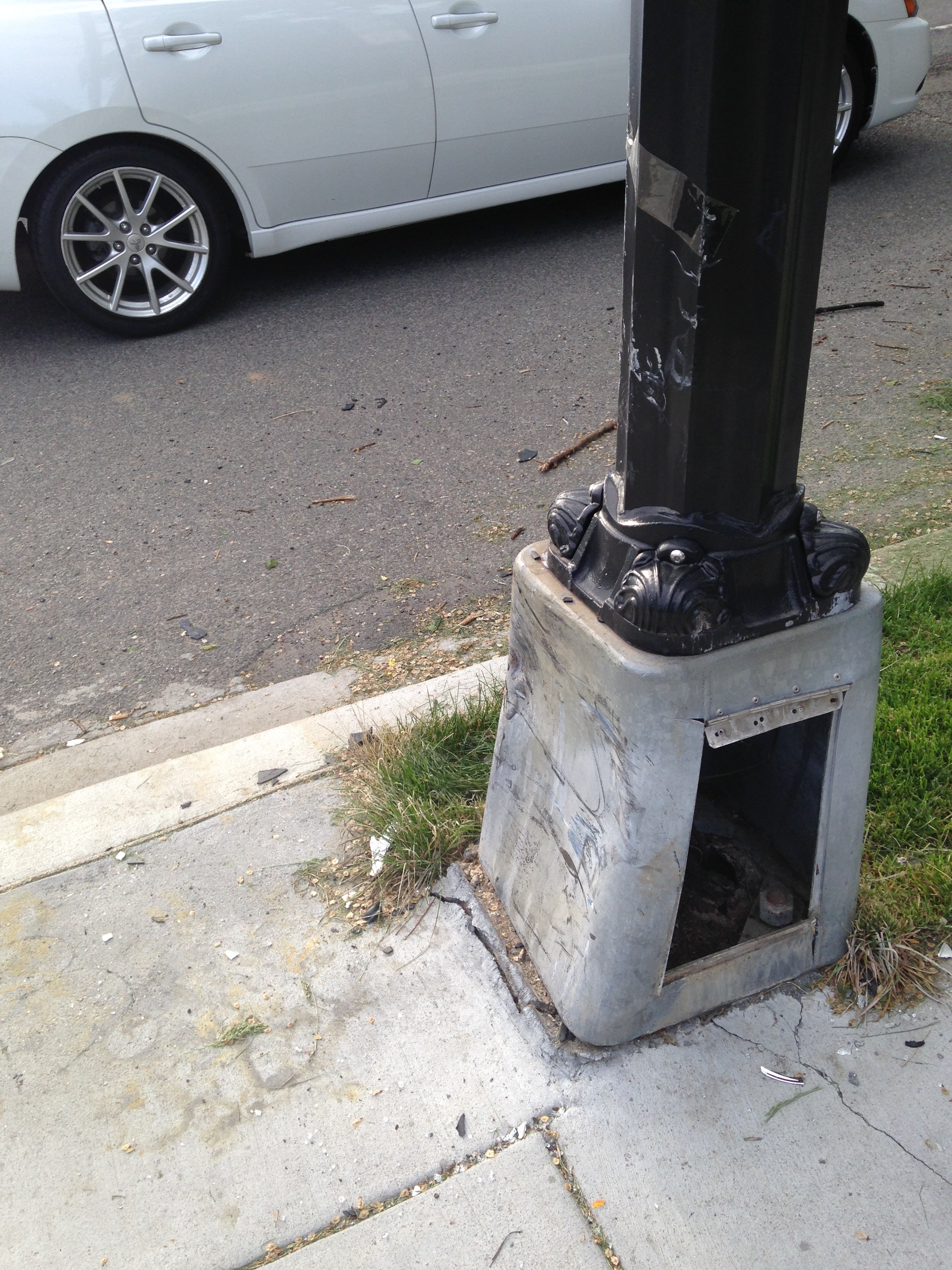 Which has already been hit by a car. 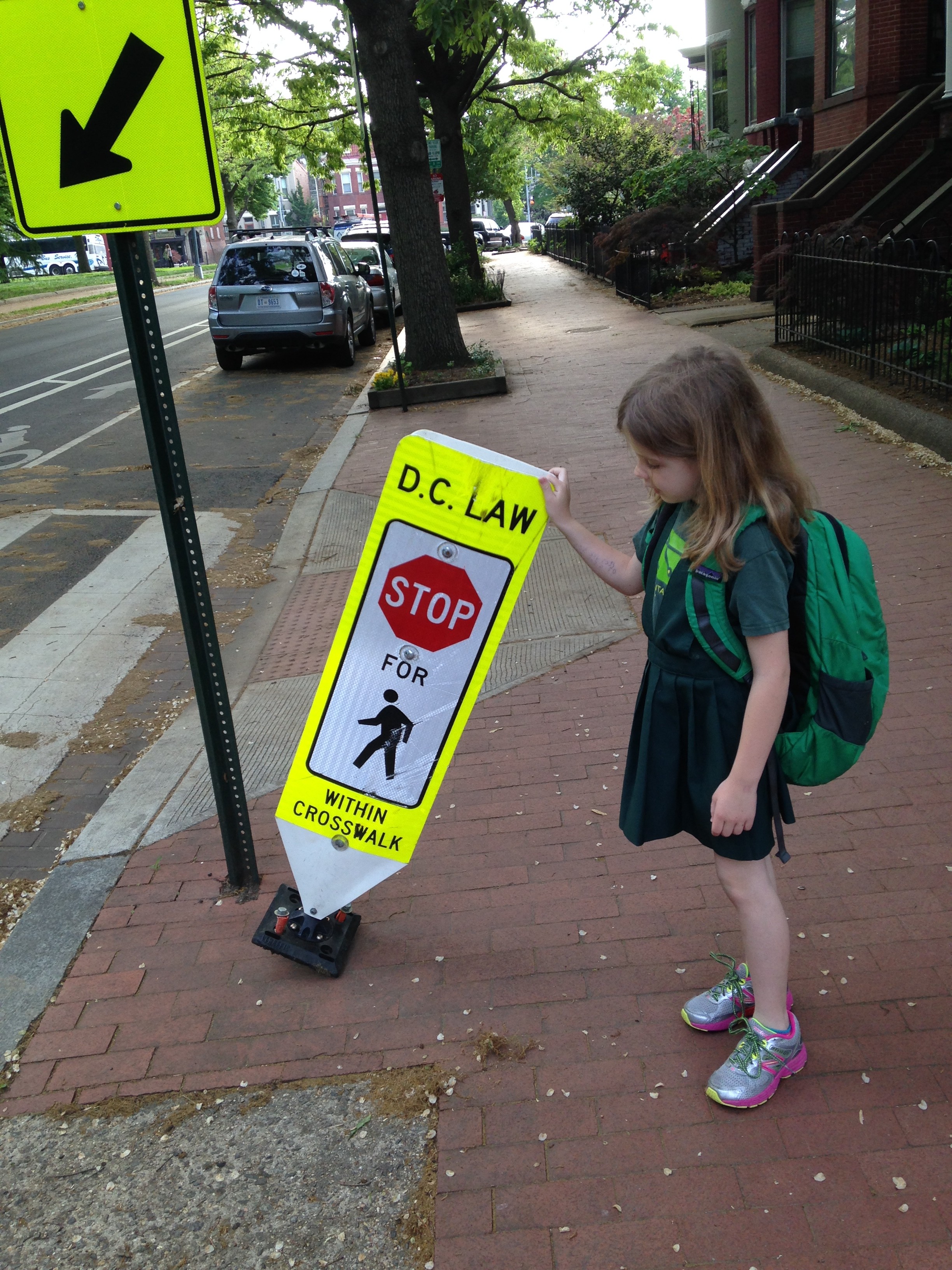 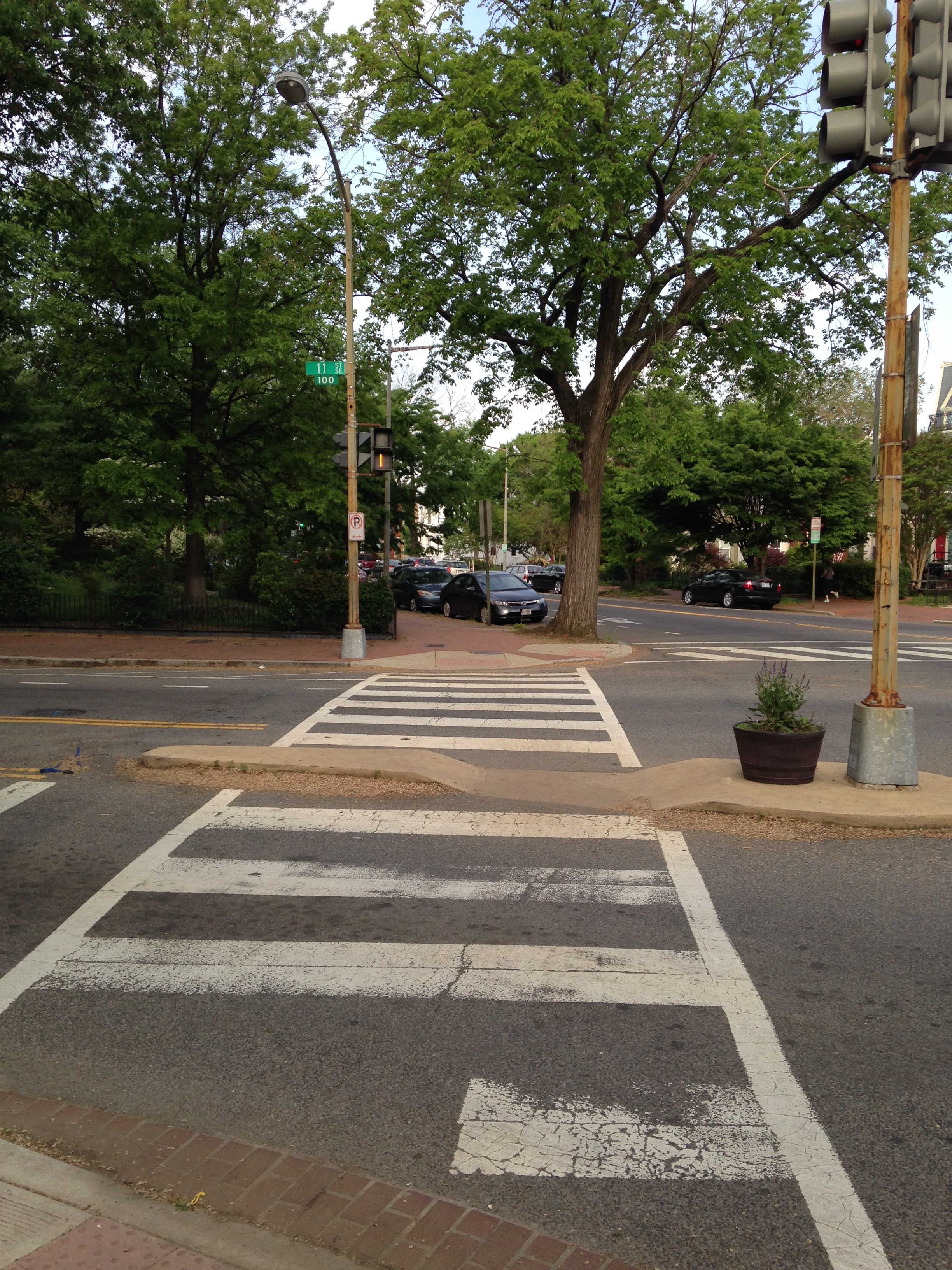 We come to the light at the southeast corner of the park. It gives us 12 seconds to cross. My seven year old can make it in 15. If she hurries. 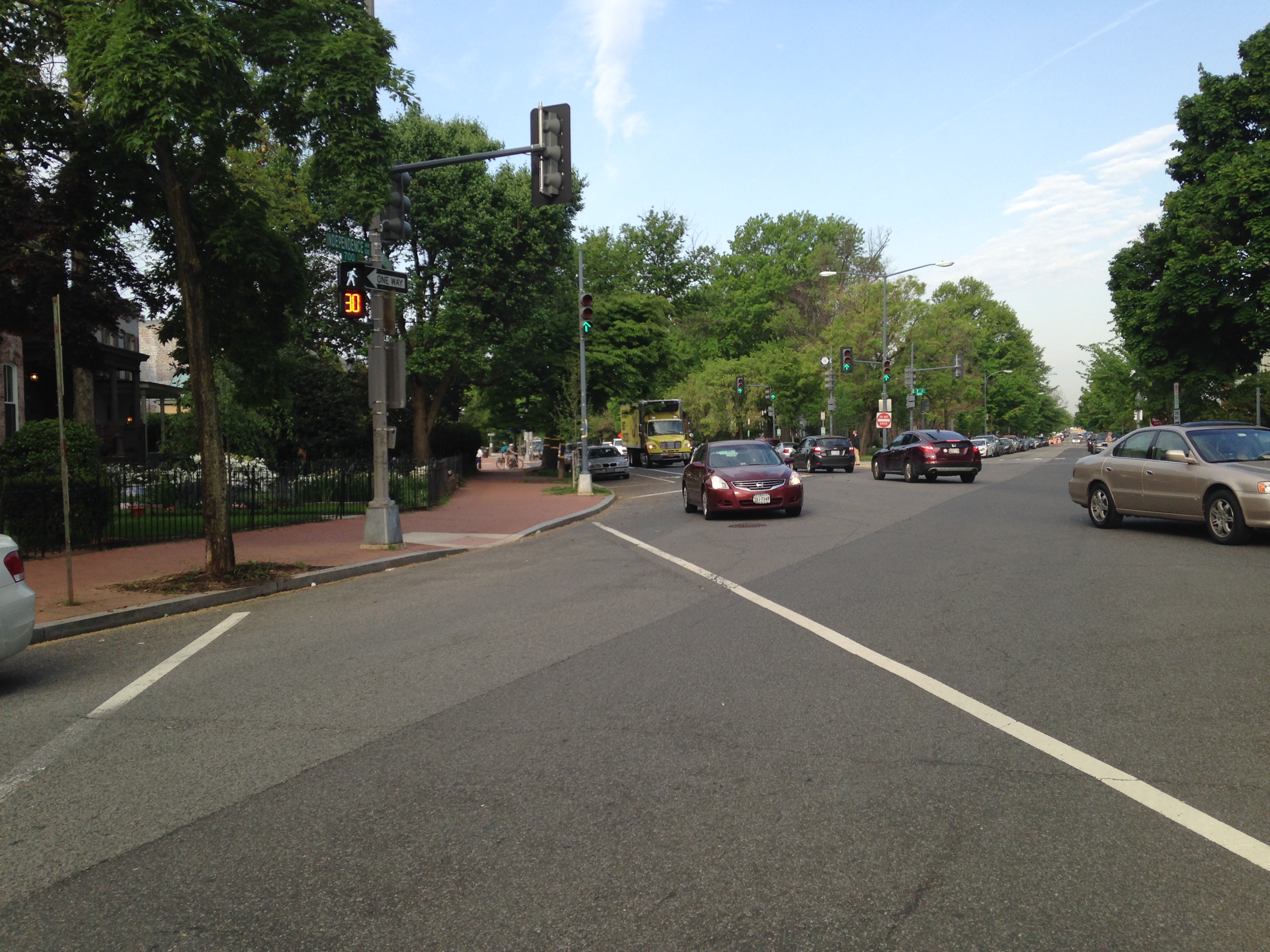 Then we get to the death defying North Carolina and Independence avenues. Cars going northeast on NC, have a green light and think this applies to the slight right onto Independence. Like this Maryland driver today... 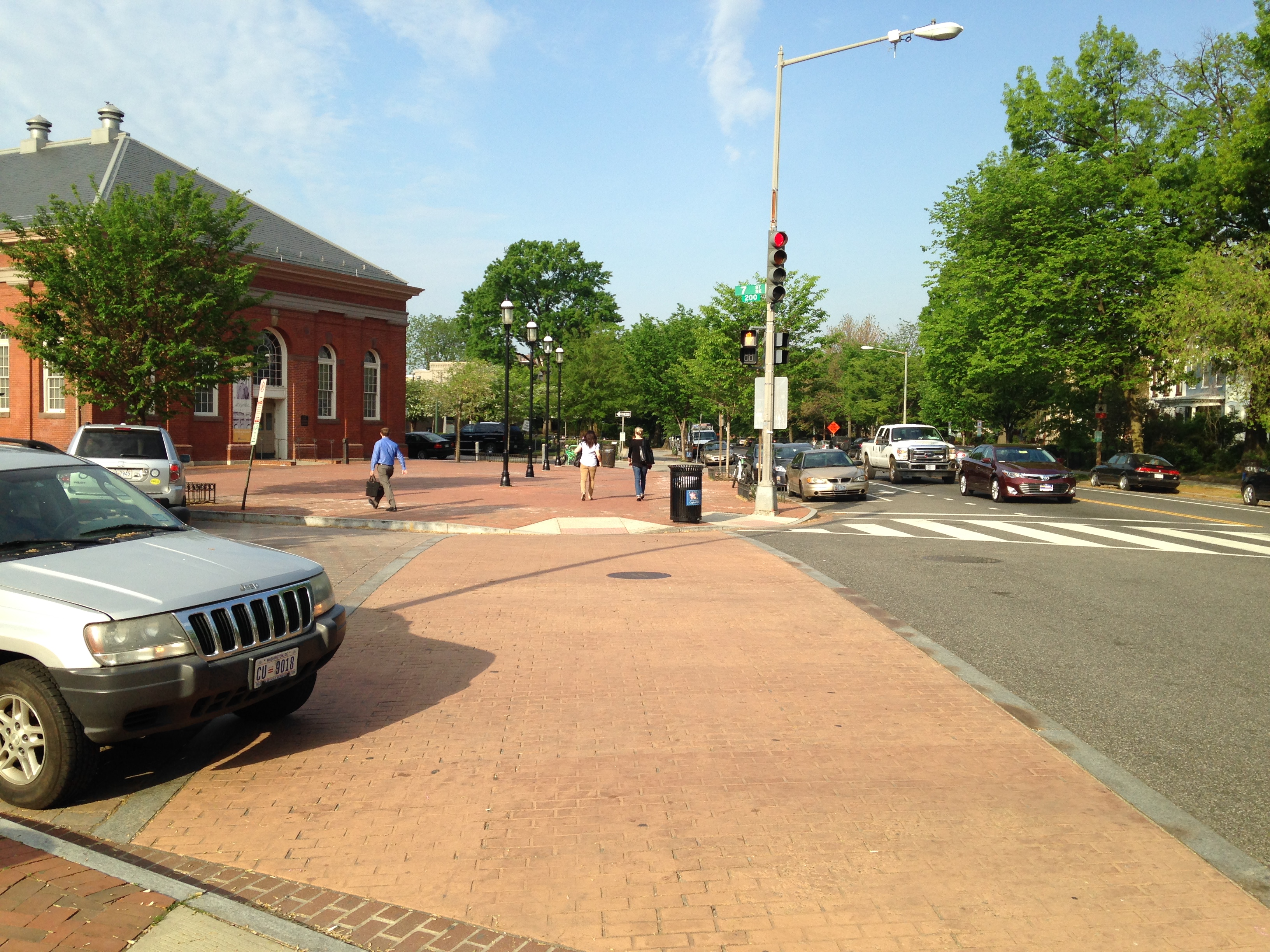 Sometimes we wait for the light to cross 7th Street. But why would you? You could be there for days… 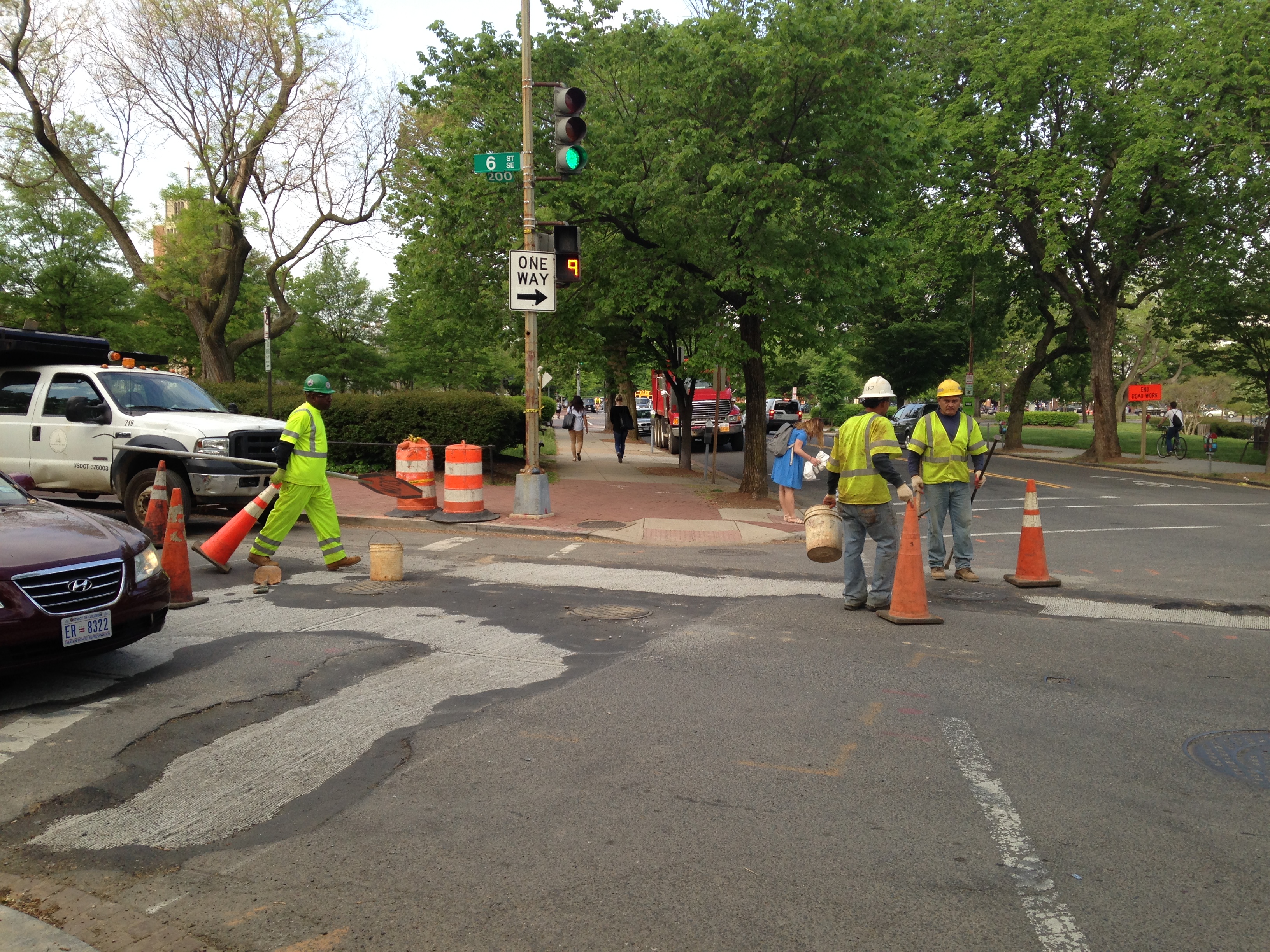 Someday this’ll be done. But hey, at least they’re actually working on it today. 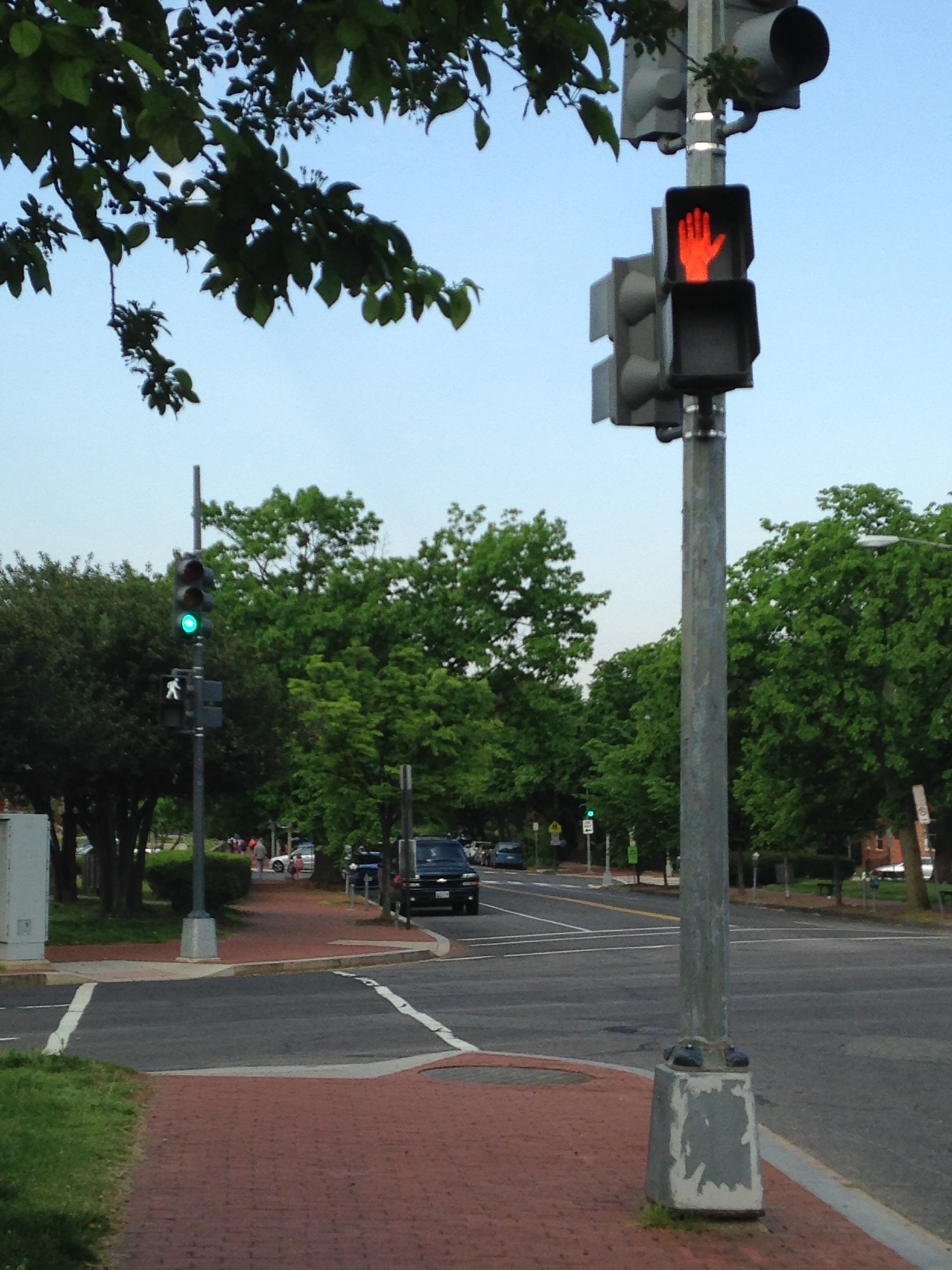 This is one of my favorites. The light on the eastbound lane of Pennsylvania Highway Avenue turns ten seconds before the northbound. It is impossible to cross in one light change. So I had time to count the cars. 19 Maryland, 7 DC, and one Virginia. He was probably lost. 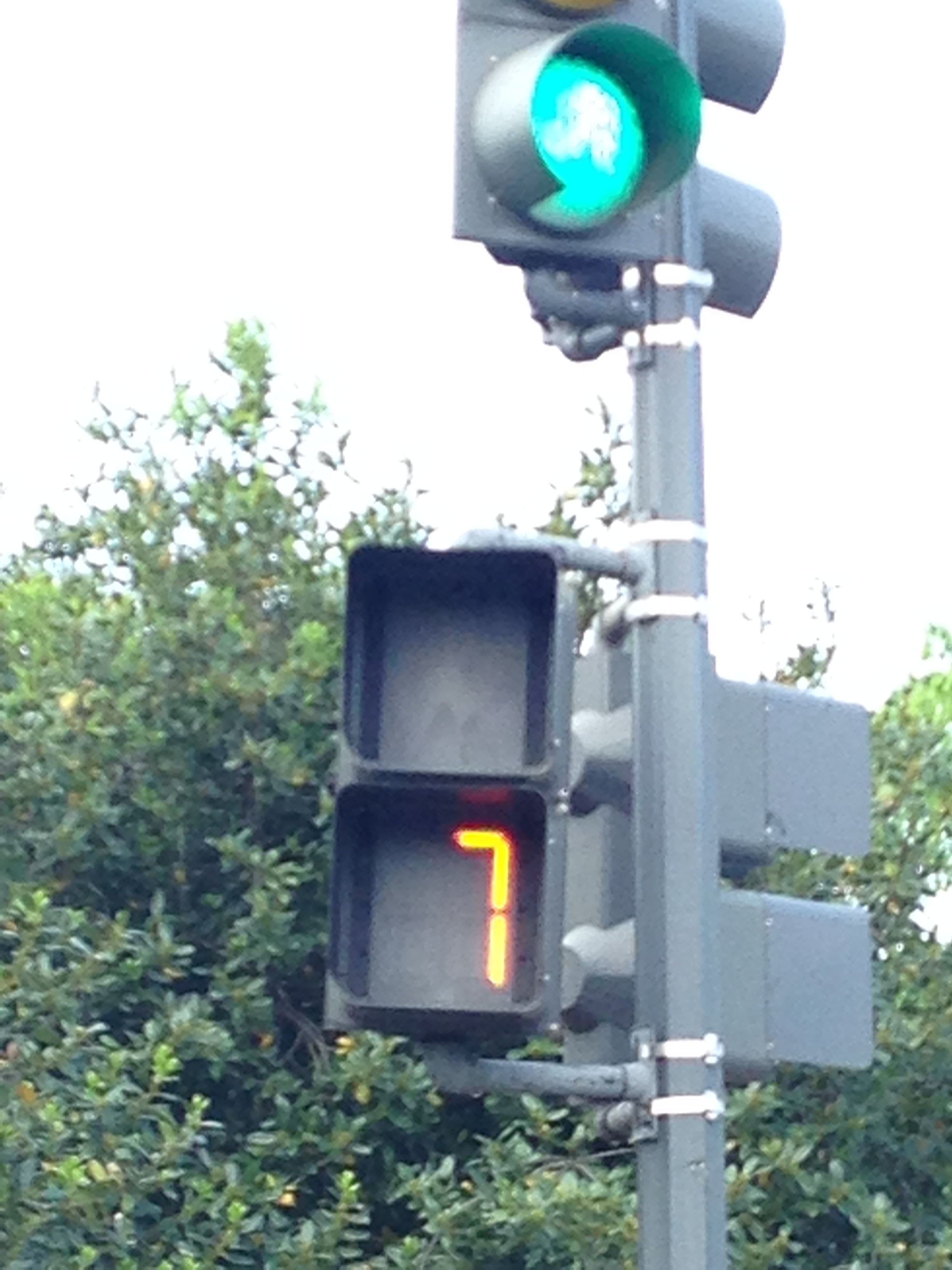 Plus, the signal “improvements” have removed the countdown, so you don’t know how long you have until it starts flashing on 8 seconds. Clearly the goal is to get you out of the way of the Maryland drivers. 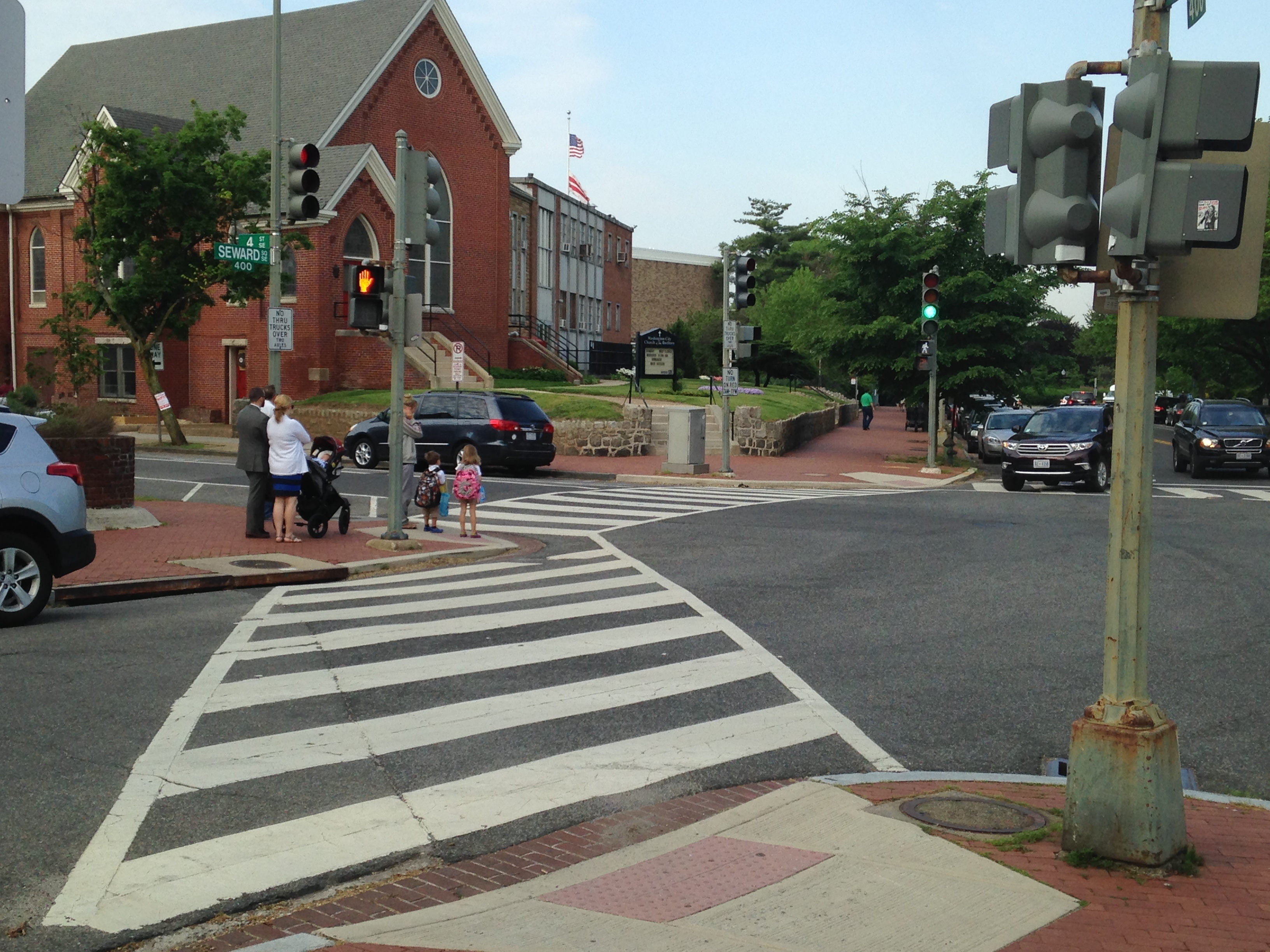 Almost there! Just swing out into that one way road, kids! 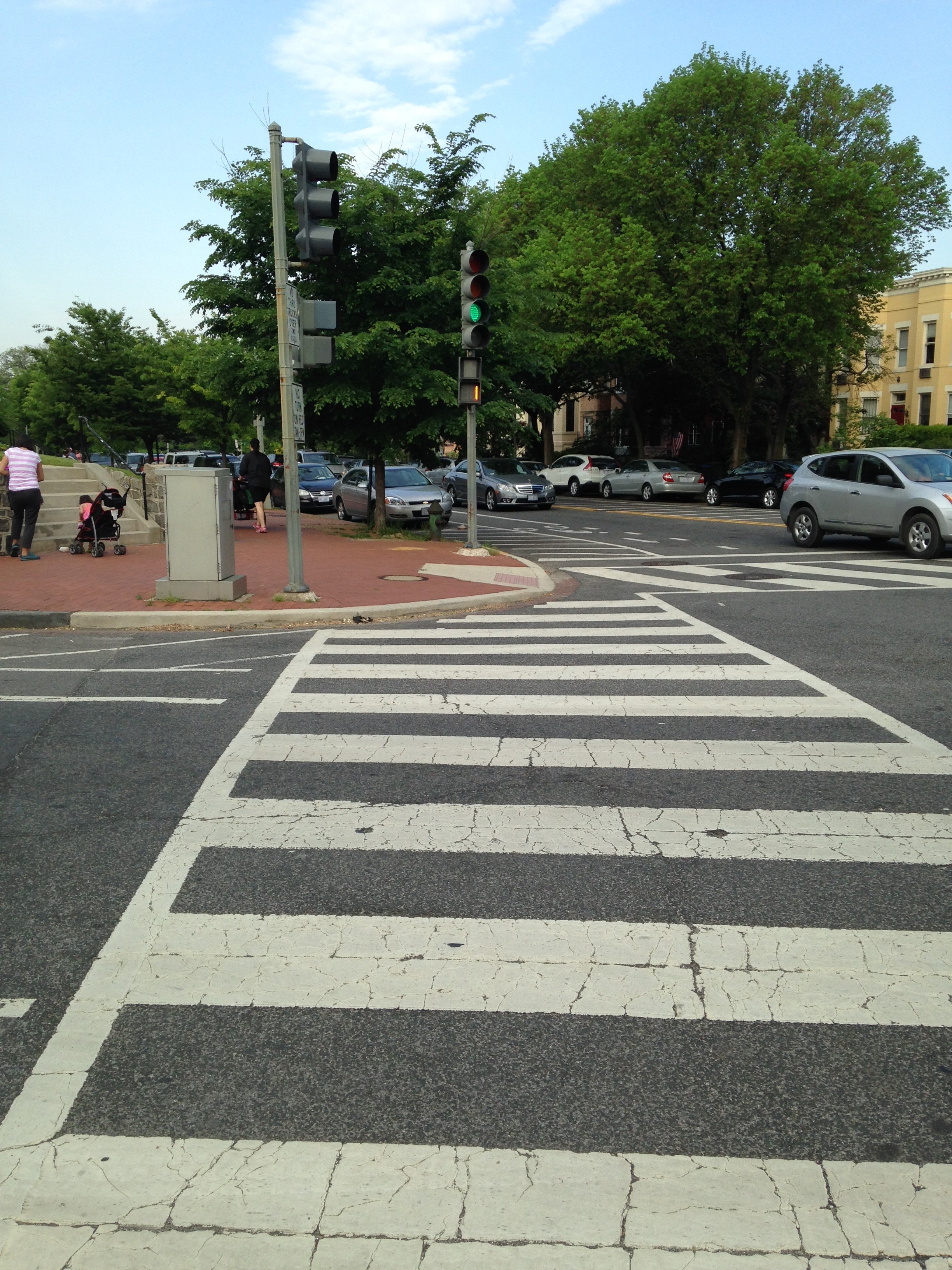 That’s right! a corner of a block with TWO schools has no curb cut where kids cross.

Look, it’s not that Capitol Hill isn’t great for biking. It is. Nor is it that Bike (and Walk) to School Days aren’t great events. They are. Nor is it that DDOT’s Safe Walk to Schools day isn’t a great program. It is.

It’s that we’re outliers. We’re in a system designed to move cars, not people. Mayor Bowser has embraced the “Vision Zero” program publicly, which is great. If she, and DDOT, and the District of Columbia go from words to action. I didn’t contact them, because I don’t care. I don’t care what they say, I’ve heard it all before. I walk this route every day. When the mayor is ready for a #freshstart, I won’t need giant golden scissors or a press conference. I’ll see it happening.

I look forward to that day.