With the 150th anniversary of the Lincoln Assassination coming up, I have been looking at some of the connections to Capitol Hill that it had. I have previously looked at some of the conspirators today and next week, I will look at some of the doctors who assisted Lincoln in Ford’s theater that evening.

It is generally accepted that a Dr. Charles A. Leale was the first MD to reach Lincoln after he was shot in the head. Leale also wrote one of the more complete accounts of the care that was given the dying president over the next nine hours.

In his Leale writes in his report that two doctors, CSTaft and AFA King were the next medical practitioners to reach the president, shortly after Leale had begun his examination of the wound. It is the latter who is of interest to us.

Albert Freeman Africanus King was born in Oxfordshire, England in 1841. His odd middle names come from his mother – who was born Louisa Freeman – and his father’s interest in African colonization. After schooling in England, he moved to the United States in 1851, along with his family. He ended up studying medicine at National Medical College – today the George Washington University Medical School – and graduated just at the outbreak of the Civil War.

Unsurprisingly, he was forced to give up his private practice and ended up an acting assistant surgeon at Lincoln Hospital. 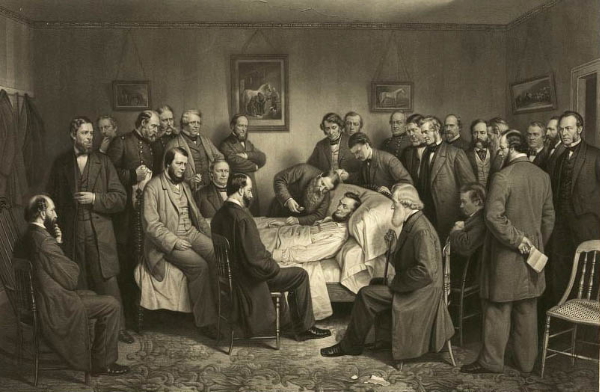 In 1865, he received another medical degree, this time from the University of Pennsylvania, and then returned to D.C. to open a practice. It was at this time that the war ended, and on April 14th, he went to Ford’s Theater for their gala performance at which the president was shot. King immediately made his way to the box to assist Dr Leale, he arrived either shortly before or after Dr Charles Sabin Taft. King then helped keeping the president alive through artificial respiration. King then was one of the men carrying Lincoln across the street to the Petersen boarding house.

All three of the doctors remained with the dying president through the night, though Dr. King’s contribution seems to have been more clerical than anything else – he was in charge of noting the observations made by other physicians as to Lincoln’s pulse and respiration.

King went on to an illustrious career after the president’s death, including a stint as dean of Columbian College medical department (as the National Medical College had been renamed) Although his main work was in obstetrics, he also did a fair bit of work with Malaria, and later in life gained further, non-medical, degrees from the University of Vermont. He died in 1914.

King was not the only medical worker with a connection to Lincoln Hospital who was there that evening – an unnamed hospital steward was sent off to fetch stimulants and sinapisms (the technical term for mustard plasters) to treat the president.

Next week: Another Capitol Hill doctor on the scene.