The Navy Yard neighborhood of Capitol Hill was the first real neighborhood to develop in D.C. While the city as a whole existed entirely to support the new Federal government and was therefore full of clerks, this neighborhood was there for the Navy Yard and so here lived all those needed to build and repair ships, such as caulkers, armorers, ships carpenters, sawyers, and sail makers, as well as those who supplied the workers with what they needed: Butchers, milliners, grocers, apothecaries, shoemakers and tailors. In short, a wide range of occupations and classes clustered here in a cohesive whole. Beyond the necessities of life, there were also churches and masonic halls – but no schools.

The lack of appropriate venues to teach the ever-increasing number of children was an issue that Washington D.C. struggled with in the years leading up to the Civil War. Although there had been schools in the District since 1806, there were far too few of them. In 1857, for instance, records showed that almost 50% of all school-age children were not in school. This was an improvement over 1840, when only 20% were going to school, but still not nearly good enough.

In 1858, finally, a bill passed that levied a tax whose money was earmarked specifically to schools. This meant that finally the District could begin teaching more of its children, including those living near the Navy Yard, for whom the closest school was at 5th and E Streets, SE. Fortunately, the District had bought a building five years earlier that would do for a school: The Odd Fellows Hall at the corner of 7th and G, SE. This small brick building had been built in 1840 as a meeting-place for several of the lodges of the Independent Order of Odd Fellows, which had started in the United States in 1819, and was spreading rapidly at the time. While the building had only two rooms, it was better than nothing. It was given the unromantic name “Primary School #4” and Lydia Choate was assigned as principal. 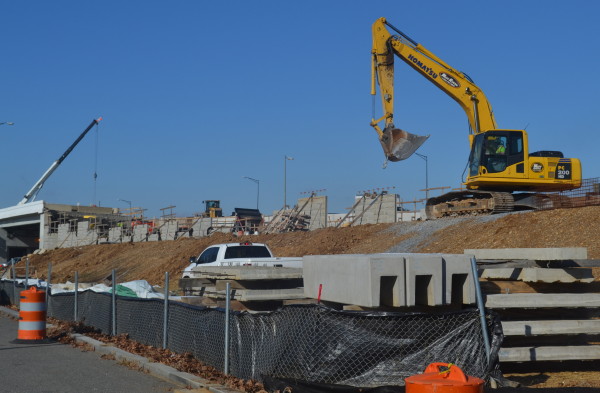 Work on the 11th Street offramp a year ago, at the site of the old Anacostia Engine House (RSP)

With the continued growth of D.C., and the Navy Yard, during the Civil War, it was clear that new schools were necessary. Once again, the city decided to reuse an old building, instead of erecting one actually designed to be a school. In 1866, another two-room school house was opened in the old Anacostia Engine House building. Coincidentally also built in 1840, it was for many years the only fire house east of the Capitol, other than an engine that parked near Lincoln Park at the end of the Civil War.

The newly-refitted building actually contained two schools: A primary and a secondary school in its two rooms. The teacher of the secondary school was a young widow by the name of Amelia J. Rowland. She was also known as a poet, and had her poems published in various magazines.

Next week: The city gets around to building real school buildings.