Half a mile northeast of the Capitol stands a statue of Revolutionary War hero Nathanael Greene. It was one of the first equestrian statues in DC, and is well-known for being one of the best of its genre, anywhere. General Greene is shown spurring his soldiers on towards victory, pointing towards an enemy that hasn’t been seen on these shores in almost 200 years.

There is only one nagging question about this undeniably powerful piece of sculpture: Why was it placed in the middle of a park named after Edwin Stanton? Today, I will attempt to answer this conundrum.

Nathanael Greene was an authentic hero. He worked his way up from private to major general in the course of the Revolutionary War, and was – at least according to Wikipedia — “George Washington’s most gifted and dependable officer.” During the war, he fought and won in North Carolina and, despite being from Rhode Island, settled down in the South after the war. In other words, he was an obvious candidate for a statue commemorating his deeds in the nation’s capitol.

Such was his fame that, shortly after his untimely death in 1786 at age of 43, it was decided that he should be thus honored. Unfortunately, given the slowness with which bureaucracy is known to operate, it was not until almost one hundred years later that this plan was turned into action. In 1874, as part of an omnibus appropriations bill that also included money to pay for the base of the Lincoln statue in Lincoln Park, Congress approved money to build a statue to Major General Greene. 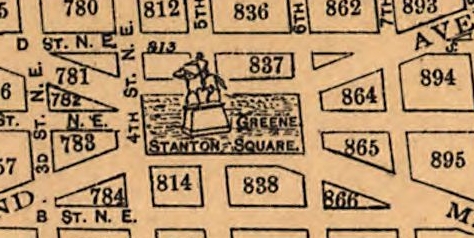 There remained only the question as to where this statue was to be placed. In looking for the optimal spot, the city planners came across a square that, although it was originally planned by Pierre L’Enfant 80 years earlier, had only recently been cleaned up as part of Alexander Shepherd’s drive to make East Washington (what we now call Capitol Hill) a desirable neighborhood.

Located at the intersection of Maryland and Massachusetts Avenues, it was an open space with the two avenues meeting at the center around a traffic circle. The middle therefore represented an obvious place to erect the statue.

There was only one problem: This square had recently been named after Lincoln’s Secretary of War, Edwin Stanton. When East Washington was developed with paved roads and sewers, it had seemed logical to also give the open spaces left by L’Enfant some names. Since Lincoln Square (now Park) had already been named, it seemed only right that the two squares that represent the ‘gateways’ to Lincoln Square be named after Lincoln’s closest confidants: William Seward and Edwin Stanton.

In contrast to the many squares and circles in the northwest reaches of DC which had been named for Civil War generals, it was clear that these two men did not have the constituents who were likely to pay for statues to be built in their honor, so in the absence of statues, it made sense for this new statue to be placed on a square that was likely to remain statue-less.

And so, in 1877, Nathanael Greene finally was given the monument he so richly earned. In the following years, some attempts were made to rename the square after him, but in the end, inertia prevailed, and the square became a park – and kept the name of the Union Secretary of War.

This status quo remains until today, much to the consternation of anyone who pays close attention to the names affixed to the park and statue – and leaving the children and dogs who are the most important users of the park completely oblivious.