Pierre L’Enfant’s original plan for the Federal City remains the blueprint for the city to this day, and often when trying to decide how best to proceed with a project, the city’s planners look to that 220 year old document to help guide their decision. As the discussion rages on whether to convert Virginia Avenue Park into Marine housing, it would seem sensible to look back at L’Enfant’s plan in an attempt to resolve this conflict. 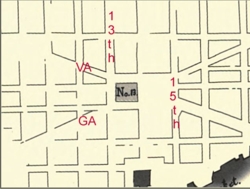 Virginia Avenue Park is located at the intersection of Potomac Avenue (formerly Georgia Avenue) and Virginia Ave, SE. It lies between 9th and 11th Streets SE and is bounded at the top by the freeway and bottom by L Street and Potomac Avenue: L Street goes basically East-West from 10th to 11th Streets, while Potomac goes NE-SW from 9th to 10th streets.

According to the L’Enfant plan, VA and GA avenues were to intersect between 13th and 15th streets, ie, two blocks east of where the intersection actually is. It seems that Georgia Avenue was not built as planned, but rather a few blocks north of its planned location. The intersection is marked “No. 13” in the L’Enfant plan. No further information is given (and in fact, the way it is pictured, the entire area was simply to be open and – presumably – paved) However, looking at other intersections, it would appear that L’Enfant meant for it to look more like Seward Square or Stanton Park than, say, Lincoln Park. 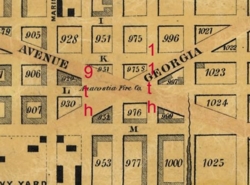 Today, the basic shape remains the same in spite of the great damage done to the L’Enfant plan by the freeway that now determines the north side of the park, taking the place of Virginia Avenue, which has been removed entirely.

It would therefore appear that the appropriate use of this park is as an open area. Whether the traffic goes through the center (as in Seward) or around the edges (see Stanton Park) cannot be said for sure. Certain is only that this intersection was meant as a public open space, and not for any building. Its current proximity to the freeway precludes its use for anything such as L’Enfant planned, but a park with a community garden seems an eminently decent solution to keep it open and public.