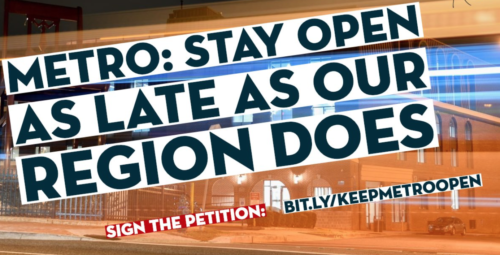 Metro currently closes at 11:30 p.m. on weekends and 1 a.m. on weekends. The Metro board would like to keep operating under this limited schedule, as these cutbacks –part of SafeTrack since the summer of 2016– have allowed Metro to do much-needed maintenance. Mayor Bowser would like to see Metro go back to its late schedule. If you want to put pressure on the Metro board so that our rail system stays open until midnight on weekdays and until 3 a.m. on weekends, the Mayor and the DC Government would like you to add your name to a petition to do just that. From the petition page online:

Metro promised the region that late night service would return on July 1, 2019. Now they’re trying to backtrack on that promise.

The Metro Board may soon vote on whether to break the promise and kill Metro’s late night rail service. Washington, DC needs a Metro system that meets the needs of our residents, our workers and our businesses. That means we need a Metro that stays open as late as our region does. Sign the #KeepMetroOpen petition to let the Metro board know that you agree with Mayor Bowser: we are a world-class city that deserves a world-class Metro.

For more background on the recent state of Metro’s opening and closing you can read this article from December on DCist.