And just like that, we’ve clocked an entire week into 2019. My, how time flies when you’re having… fun? What happened around the neighborhood and beyond this week? 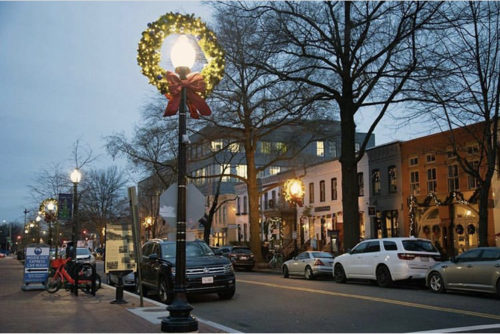 Enjoy these beauties while they last: They’ll come down by the end of next week. Photo by Capitol Hill BID on Instagram

JDLand took a tour of the not-new but admittedly improved Virginia Avenue SE. She documented her walk with many photos and her post has the customary before-and-after shots side by side. It’s amazing what four years can do to the footprint of a street. JDLand

Speaking of before and after photos, the northeastern and southeastern corners of 13th and H Streets NE are unrecognizable. Photos via PoPville.

Police chief Newsham complains that the DC Council’s criticism of police has “emboldened” drug dealers  (emphasis from the Washington Post). Ward 6 council member Charles Allen was quoted as saying that “holding officers accountable and confronting crime ‘are not mutually exclusive.'” Tensions are high as last year’s homicide count is the highest in several years. Police union chairman has a poignant quote in the article as well: “”There’s a day-care center there,” he said, “and people were more interested in what the gun unit did than the fact there was a dangerous drug 10 feet away from little children.”” Washington Post. (subscription)

It’s back to work for your ANCs– the hardest-working and unpaid-est public servants. Capitol Hill Corner

ANC Commissioner Denise Krepp asked for body camera footage from the three policemen who questioned three youths outside Frager’s a couple of weeks ago. The police invoiced Krepp $5000 for the video. Why so expensive? According to D.C. Police, the fee covers the redaction process for the video, which is done by an outside contractor. Yikes. FOX-5

We’ll ignore the fact that the Eastern Market photo is illustrating the Union Market paragraph: It’s just nice to see some of our favorites in this guide from the Evening Standard.

Yes, we’re really looking forward to Emilie’s. So is WTOP.

The Star Grocery, across from the vacant former Argonaut (sniff…) will become Daru in late 2019. WCP (thank you to Barred in DC for the heads-up)

Furlough specials, because man, do we have a caring community. Eater DC and Barred in DC

Not exactly news, but worth mentioning: Remember Park Café? Remember Ninella? Remember Lincoln Park Wine & Kitchen? The space that’s housed all these restaurants will now become a Pacci’s. They are slated to reopen in October of 2019. Hill Rag

Hoodline declares Fare Well one of the best diners in DC.

More information was released about Riley Kuznia, 20, the Marine who died at the Barracks last week. His death was not a homicide. WUSA-9

No, your eyesight didn’t suddenly get better: Many Metro stations are looking about 3-9 times brighter, to be exact. Metro Press Release

The sidewalks along Florida Avenue NE and NW are a disgrace. This tweet is a poignant reminder that we take mobility for granted. If you see any extremely narrow intersections around you, take a photo and tag us on Twitter or Instagram, @thehillishome

From 8th street NE to U street NW, the entire Florida Avenue corridor subjects pedestrians to senseless compromises, while devoting 4-6 lanes to vehicle traffic. That’s not good for safety or meeting our environmental goals. It’s time for this city to start living its values. https://t.co/1lGKKnDKHk