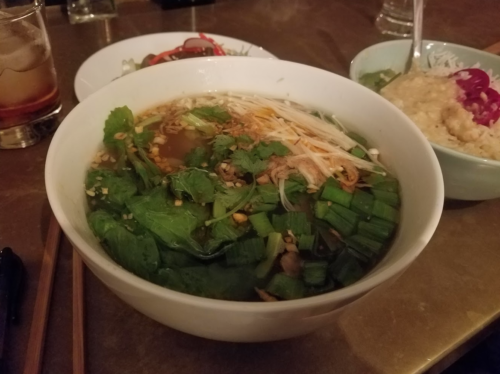 Dorjee Momo, founded by Tibetan refugee and chef Lobsang Dorjee Tsering, opened on January 27 at 317 7th Street SE. After holding pop-ups around the city, at Thip Khao in Columbia Heights, Sally’s Middle Name on H Street NE, and most recently, at Shop Made in DC in Dupont Circle, Dorjee Momo is taking up a longer residency above Bullfrog Bagels.

Behind the colorful curtain hung in the doorway, the Tibetan-influenced mobile kitchen transformed the bagel counter into a host stand. A colorful curtain hung in the doorway gave the space a dim, but homey vibe, and I immediately recognized the Twin Peaks theme song playing in the background. A waitress appeared from the kitchen with a plate of steaming dumplings and hopped up the stairs to the second level.

Upstairs, the converted row house felt cozy. A bar, decked out with lotus-shaped candles and small vases of flowers, faced the exposed brick wall, while six tables lined up against the opposite wall and wrapped around the second floor staircase. Hot plates were waiting for pots on several of the tables.

My roommate and I had no trouble getting bar seats at 5:30 on Saturday evening. If you do not have a reservation for a table or hot pot, you can sit at the bar where cocktails, juices, and plant-based and meat-based dishes are served. The three cocktails listed on the menu are spin on the classics with European roots: Nordic-based Aquavit infused with Tibetan peppercorn, Spanish-brand gin and celery soda, and a Manhattan with Italian vermouth and clove.

I ordered the Manhattan, called Moonpeak ($10), and the bartender offered to leave out the bitters when she overheard me say I didn’t care for them. The Moonpeak was nice and strong and came with an enormous ice cube. 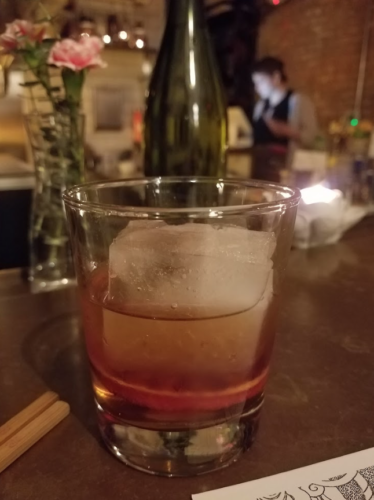 The dishes ($6-16) on the plant-based and meat-based menu ranged from vegan sunflower buns to pan fried lamb momo. Both sections of the menu have gluten-free options. Listed under additional sides is Chef Dorjee’s signature 21-Spice Sepen Dipping Sauce–perfect for those momo for which I will soon be returning.

Upon studying the menu more closely, I realized each dish seemed familiar with a creative pop. Ingredients like sunflower buns, beet-pickled lotus root, and snow pea tips give the dishes just enough of a twist without overwhelming the less adventurous eaters.

I would suggest ordering three or four dishes for two people. I tried the Sichuan Eggplant Salad, the Tibetan Chicken Dumpling Soup, and the Red Coconut Beef Curry and Turmeric Rice. We also ended up with the Masoor Dal and Jeera Rice after the waitress accidentally gave us the wrong order. We were so excited to eat, we chowed down before we realized the mistake– oops.

The eggplant was served cold, sprinkled with sesame seeds, scallions, radishes, and a spicy vinaigrette. It was a delicious appetizer: even my veggie-averse roommate had seconds. The perfectly chewy dumplings were stuffed with generous bites of chicken and the broth held its own. The soup was full of enoki mushrooms, wild garlic chives, and snow pea tips. The “tips” are actually the leafy parts of the plant, popular in Chinese stir-fry. I would recommend asking for extra dumplings if you share the bowl.

Although I only tried a bite of the beef curry, my roommate said it was spicy and delicious and “not for the faint of the tongue.” The aesthetics of the dish were on point: mustard-yellow rice complemented by purple cabbage and the creamy texture of the red curry and beef offset by pops of green.

Dorjee Momo nailed the dal, which was listed as vegan and gluten-free on the menu. Having neither of those dietary restrictions, and not being someone who has much dal, you may take my opinion with a grain of salt. However, it was delicious. The jeera, or cumin, rice added an extra layer of flavor. I would order it again.

Dinner at Dorjee Momo is served from 5:30-11 p.m., Thursday to Sunday. The pop-up is scheduled to stay in the Eastern Market location until sometime this summer. Perhaps they will throw down roots on the Hill if we keep the restaurant busy enough.

WHY: Because they nailed the dal!

By Kate Priddy      No Comments