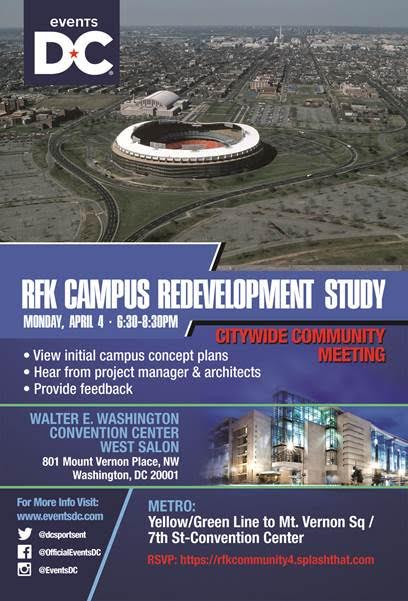 Events DC has been working on the redevelopment of the RFK Campus and will present the conceptual designs for what the campus can be tonight at 6:30pm a community meeting at the Convention Center. They are also seeing feedback from the meeting participants.

An email from ANC 6B Commissioner Denise Krepp to her constituents notes that, “at least one of the plans that will be shared with the public will include an NFL football stadium. Please note that the final decision has not been made on how the property be used in the future.  Please attend the meeting.  This will be your opportunity to provide input on the various plans.”

The Washington Post got a preview and reported that two of the six plans “lay out a path for the Redskins to return to the District, though serious obstacles remain should Mayor Muriel E. Bowser (D) and the D.C. Council move to reach a deal with owner Daniel M. Snyder.” One of these plans also calls for “a basketball and hockey venue capable of replacing Verizon Center.” And all of the plans include “a raft of suggested recreation facilities for a city with a booming population, among them playing fields, a field house, a water park and a sports-and-entertainment complex that officials likened to Chelsea Piers in Manhattan.”

Come see the plans for yourself and have your opinion heard at the Walter E. Washington Convention Center tonight from 6:30-8:30pm.