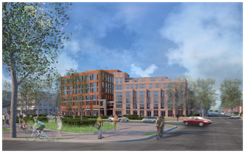 We’ve all been watching the demolition and it’s finally time for the official ground breaking.

Today, at 11am, Mayor Muriel E. Bowser will join Anthony Lanier, president of Eastbanc, and other city officials and neighborhood leaders for remarks and a ceremonial groundbreaking.

According to the initial timeline released in February, excavation will start soon and continue into the fall, followed by vertical construction, and then facade and interior construction.

Washington, DC – On Friday July 17, Eastbanc Inc. and Stanton Development will begin construction on the anticipated Hine School Redevelopment Project at 700 Pennsylvania Avenue, SE during a ceremonial ground breaking event. The official ceremony is open to the public and hosted by DC Mayor Muriel E. Bowser and other city officials and community leaders. The event is scheduled to begin at 11:00 a.m. with introductions by Anthony Lanier, president of Eastbanc, Mayor Muriel E. Bowser and will conclude with a groundbreaking photo opportunity at 11:50 a.m.

The Hine School Redevelopment project is the result of collaborative effort and strategic planning from the District of Columbia, EastBanc, Stanton Development, Dantes Partners, LS Caldwell & Associates, Clark Enterprises, Jamestown LP and The Warrenton Group. The project has received support from the Coalition for Smarter Growth, Capitol Hill Restoration Society, and Advisory Neighborhood Commission 6B.