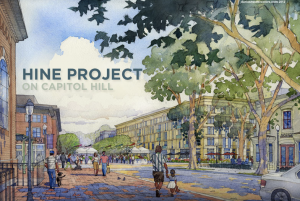 As reported by District Source and Hill Now, the Hine School Development project can finally move forward after a the D.C. Court of Appeals rejected a request to send development plans for the Hine Junior High School site back to the D.C. Zoning Commission. So at last night’s ANC 6B meeting, the Stanton-Eastbanc team provided an update on their plans to start work on the site. The initial timeline for demolition, excavation and construction is as follows:

During this time, monthly Hine Community Advisory Committee meetings will continue to take place so that neighborhood groups such as Eyes on Hine, Hine North Neighbors, and EMMCA can keep developers aware of the impact of construction on the neighborhood.

By the time the demolition phase has started there will be a 24-hour hotline established to connect neighbors directly with project managers in the event of any issues. The project website, hineschool.com, will also be regularly updated with news and meeting and contact information

Rat abatement, which is already underway at the site, will be intensified leading up to demolition. ANC Commissioners took this time to request that the developers continue abatement efforts throughout the demolition effort.

Another issue raised by commissioners was the concern that many Flea Market vendors do not seem to be aware of the plans to transition them to 7th Street between C Street and Pennsylvania Avenue SE. While the developers have been working with flea market management, commissioners requested that developers and Flea Market management due more to communicate with vendors. As for Frager’s, they will vacate the “pad” by March 22nd.

So there you have it. Years of negotiations, debates and hearings seem to finally be over and in just two more years, we’ll have new residential and retail at one of our most prominent intersections.