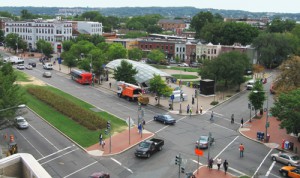 Waaaay back in 2009, there were a series of community meetings to discuss plans to redesign the public space on Pennsylvania Avenue, SE between 7th and 9th Streets. Original plans entailed rerouting Pennsylvania Avenue around a large square or circle, which received mixed reaction — to put it mildly.

While the project has been delayed, it is still moving forward and it’s time for community input. The first of two public meetings was on Sunday, the second is tonight, so if you’d like to learn more, get over to the Hill Center! After the meetings, the drawings will be posted to the project website — www.easternmarketmetropark.com – and comments can be submitted through the website until Friday, January 10th.

For the past three months, a design team, led by architect Amy Weinstein (Esocoff & Associates) and landscape architect Lisa Delplace (Oehme van Sweden), has been hard at work developing two alternative Master Plan concepts for all of the publicly owned land along Pennsylvania Avenue, SE between 7th and 9th Streets, including the area around the Eastern Market Metro Station.

The overall goal of the project is to renew and upgrade the public space in this two block area, both functionally and aesthetically.

At two public meetings in early December at the Hill Center (921 Pennsylvania Avenue, SE), the design team will present to the community its two alternative Master Plan concepts.

The second meeting will be Wednesday, December 11th from 7:00 p.m. to 9:00 p.m. in the Lincoln Room. The presentation and format of both the December 8th and December 11th sessions will be identical.

After the design plans are presented, there will be breakout sessions to get feedback from the community. Both meetings are open to the entire Capitol Hill community and all are encouraged to attend one of the two meetings.

Subsequent to the December presentations, the drawings will be posted to the project website — www.easternmarketmetropark.com – and comments can be submitted through the website until Friday, January 10th.