UPDATE 4:40 p.m. Mayor Gray has confirmed 13 died in today’s shooting at the Navy Yard. Neighbors in the immediate areas should stay in place, as the investigation is still ongoing. The FBI has officially confirmed the deceased gunman as Aaron Alexis of Queens, New York. There are plans under way for a candlelight vigil tonight at 7:30 pm at Freedom Plaza. The Nationals also confirmed that they have postponed tonight’s game against the Braves. There will be a double-header starting tomorrow at 1:05 p.m.

UPDATE 2:49 p.m. Via MPD on Twitter: “The white male in the tan outfit has been identified and is not a suspect or person of interest.”

UPDATE 2:12 p.m. There are at least 12 fatalities in today’s shooting, according to Mayor Gray. “We have no known motive… [but] have no reason to think terrorist motive,” he said. Another press briefing will happen at 4 p.m. Chief Lanier: “Response… was absolutely nothing short of heroic.” In addition to the 12 fatalities there are additional non-fatal injuries. The investigation is officially transitioning to an FBI lead. Any additional info should be reported to: 1-800-CALL FBI (225-5324).

Police say they are still looking for a white male 40-50 years-old, wearing a tan military uniform and a navy, beret-style hat. And, a second black man 40-50 years-old, 5’10” and approximately 180 lbs. with gray sideburns. Most of the area remains on lockdown. Residents are advised to please stay home.

Police say the area is safe, but ask for you to stay indoors. Residents have been sent text alerts. An extensive search of the base is ongoing.

UPDATE 1:55 p.m.: Check the full list of schools still on lockdown (below); Capitol Hill Arts Workshop has canceled after school programs. The Nationals hotline is still announcing tonight’s game is scheduled, but this may change by the 7:05 p.m. first pitch.

UPDATE 12:32 p.m.: President Obama acknowledges delay due to Navy Yard shooting. “These are men and women going to work, doing their job. They are patriots.” The President wants an investigation to be “seamless,” and he sends his condolences to those who have died. UPDATE 12:17 p.m.: As per Chief Lanier, an MPD officer was shot in the engagement with a shooter. The officer is in stable condition. One shooter is deceased and there are other casualties. Still, no confirmed number. There are multiple victims inside. Main concern for MPD is that two other shooters are still not located: 1.) white male, last seen around 8:35 am in khaki tan uniform with beret, has handgun; 2.) black male, around 50 years of age, olive drab uniform, long gun. No reason to believe that they are military personnel but are wearing military-like information. If public has information, call police line: 202-727-9099. UPDATE 12:11 pm: Press conference with Mayor Gray and Chief Lanier. MPD active shooter team responded immediately. Mayor Gray: “We know that there are four wounded…. still trying to confirm number of fatalities…. As far as we know, this is an isolated incident.” Mayor said this is an active investigation.

UPDATE 11:38 am: A MedStar spokesperson at Washington Hospital Center says the victims are in critical condition, alert and speaking. There is a woman with a gunshot to the shoulder and a woman with a gunshot to the head and hand. The officer is a male and in surgery right now– shot on legs. The hospital, which currently has three injured, has additional security, and has been instructed to expect more victims. Spokeswoman confirms deceased at the scene, but is not confident of number. There will be a future briefing.

UPDATE 10:36 a.m.: The US Navy confirms that four people are dead and eight people have been injured in the Navy Yard shooting. The Navy won’t confirm the number of shooters as of this post time.

According to an official release by the US Navy, an active shooter was reported inside the Naval Sea Systems Command Headquarters building (Bldg. 197) on the Washington Navy Yard at 8:20 a.m. this morning. First reports said that an officer was down, shot twice in the leg and that he was rushed to George Washington University Hospital.

Pretty much the entire Navy Yard/Southeast Waterfront area is in lockdown. For safety precaution, Mayor Vince Gray has urged citizens to steer clear of the area while MPD and first responders do their job.

UPDATE 12:41 p.m.: THIH has confirmed that many schools are still on lockdown on Capitol Hill. According to a staffer with Councilmember Tommy Wells’s office the following schools remain on lockdown: 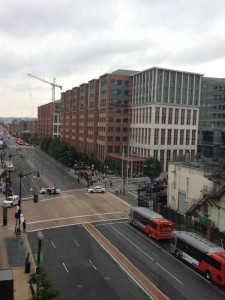 Metro provided several buses to assist with this morning’s shooting. Photo via @JennaSTalbot on Twitter.

Drivers should avoid the Navy Yard area. There are still major closures on M Street, between South Capitol Street and 11th Street, SE., but Metro says the Navy Yard Metro station remains open. DDOT reported that National Airport was closed for departures for a short time this morning because of the incident. Business has returned to normal at the airport. And, this afternoon DDOT released the following map of road closures (highlighted in red): 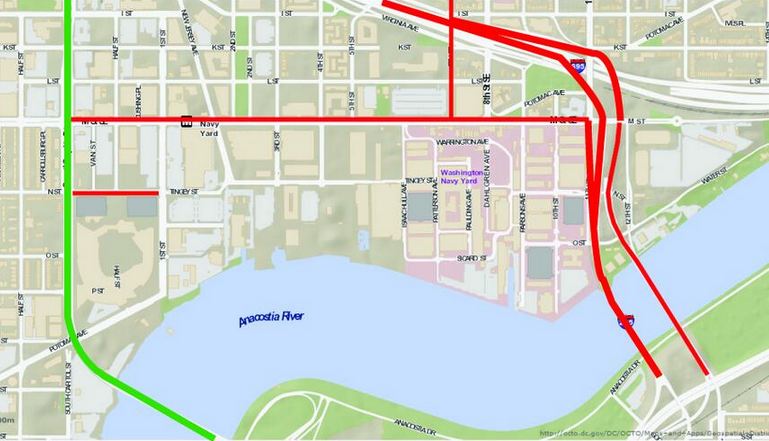 More as this story progresses. Stay safe, Capitol Hill. If you are at the Navy Yard, tell us how you’re doing.

One response to “Shooting at Washington Navy Yard”