Last week, we looked at the urban legend surrounding  Adelaide Johnson’s The Portrait Monument to Lucretia Mott, Elizabeth Cady Standon and Susan B. Anthony located in the rotunda of the Capitol. Although there is a hunk of unfinished marble connected with it, there is no reason to believe that Johnson ever intended this to be ‘finished’ with the bust of a woman president – or anyone else, for that matter. However, there have been attempts to amend it over the years.

On February 15, 1921, with an enormous amount of pomp, the Adelaide Johnson’s statue The Portrait Monument to Lucretia Mott, Elizabeth Cady Standon and Susan B. Anthony was unveiled in the Rotunda of the Capitol. With Jane Addams presiding, Speaker of the House Frederick H. Gillett there to receive the statue on behalf of Congress, and young women representing women’s groups from around the country in attendance, two women in the garb of Greek goddesses removed a veil covering statue while an opera singer sang a popular hymn.

The only complaints came from Senator James D. Phelan of California, who hoped the statue would soon be removed, as it was “bad art.” Instead, it was Phelan who left a few weeks later, as he had lost his re-election campaign the previous year.

Sadly, the statue, like Senator Gillett, did not stay long in this prominent place. Instead, it soon found itself in “an obscure corner of the Capitol basement.” The National Woman’s Party was appalled, and convinced the powers that be to move it to the center of the crypt, directly below the Rotunda – and right where George Washington was to have been buried. This raised the ire of the Capitol tour guides, who felt that it blocked the unobstructed view of the “longest corridor in the world.” Thus, the following year, it was shifted again – to one side of the crypt. All of these movements occurred within a year of its original unveiling, reflecting the enormous amount of controversy the statue had unleashed. However, after this peripatetic year, the statue remained at rest for over 50 years.

In 1995, a measure was approved by the Senate to move the statue back into the Rotunda. All was well, until Newt Gingrich, Sue Myrick and other members of the House of Representatives objected. They refused to allow any public monies to be spent on the move, which meant that a hastily-formed group named the Woman Suffrage Statue Campaign had to raise the money to return the statue to its original location.

Money raised, the statue was moved back into the Rotunda in 1997 – though not before further controversy broke out as to whether or not the statue should be changed to add the bust of Sojourner Truth, the famous 19th Century African American suffragist. 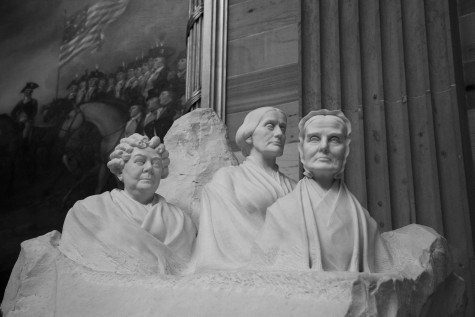 The statue in the Rotunda today. Photo by Maria Helena Carey.

Although at the time, the decision was made not to change the statue, in 2004, over 1/3 of the Senate signed on to S. 2600, a bill which would have added Sojourner Truth to the monument. Sponsored by Hillary Clinton and co-sponsored by 36 fellow Senators, this bill was referred to the Committee on Rules and Administrations, where it died with the end of the 108th Congress. This remained the closest that it has ever come to actually being changed. One hopes that when the first woman president is elected, there will not be a similarly misguided effort to add her bust to the monument.

Meanwhile, the Portrait Monument remains in its prominent spot in the Rotunda, visited by millions of tourists every year, and surrounded by the portraits of the likes of George Washington, Abraham Lincoln, Thomas Jefferson, and Martin Luther King, Jr.