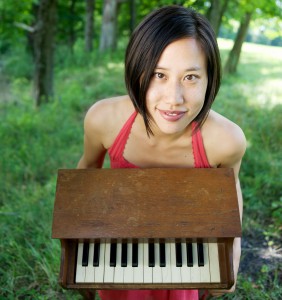 Phyllis Chen and her toy piano

Spring is here and with it hoards of tourists and protesters. Such is the privilege of living here in the Nation’s Capital. So how will we avoid all of the cherry blossom peepers this weekend?

Tonight at 8pm the International Contemporary Ensemble is back at the Atlas. Last year this new-classical supergroup led by the certified MacArthur genius Claire Chase, performed a peice in the Atlas lobby which incorporated the audience’s cell phones. Tonight they collaborate with two young composers, Phyllis Chen and Carla Kihlstedt. Expect a few ditties played on a toy piano. Tickets are $25 Advance/$28 Door/$15 students.  More information and tickets can be found here.

Friday head over to CHAW to check out Taffety Punk Theatre’s remount of 2012 production, Oxygen, a play set in modern-day Russia that is essentially a live concept album. The audience is guided through the evening by an onstage DJ, while two actors perform ten “tracks”scenes that are constructed like prose songs, complete with refrains. The Washington Post called it, “part poetry slam, part bitter romance, part moral screed.”  Perofrmance is at 8pm. Tickets $15 and can be purchased at http://tix.taffetypunk.com/ or 1-800-838-3006.

The Hill Center continues the Friday night Documentary series with Smithsonian Channel’s Secrets of the Louvre Revealed. No word on whether the film addresses anything from the DaVinci code. The screening is free and begins at 7pm.

Saturday be a part of an Origami mural project. Head over to M Street and New Jersey Avenue, SE  between 10AM to 3PM  where DC artist iona rozeal brown and learn about the ancient art of Origami making. The public is invited to contribute to the installation of D.C.’s first ever Origami mural.

Parents, finding a sitter is one of the most challenging parts of parenthood. (Paying them is another.)  Meet willing sitters in our neighborhood at a meet up with Urban Sitters in Stanton park. The Hill-based sitters on hand for a parent and sitter meet & greet from 10:30am-12:30pm on Saturday afternoon.

Capitol Hill Little League celebrates Opening Day on Saturday with festivities happening at Payne Elementary (15th and D DE) beginning at 5pm. Moon bounce, bake sale, hot dogs and other treats are available. Which local celeb will throw out the first pitch??  Rumor has it the Pretzel Bakery will be selling pretzel dogs across the street.

Instagram users there’s a meetup on H Street at 1pm for your walking, brunching and photography needs. Find out more information here.