Lost Capitol Hill: Another President on the Hill

Presidents don’t tend to spend much time on Capitol Hill: A brief stop to speak to Congress, or possibly to twist a Congressperson’s arm, sure. But they don’t live there – after all, not only do they have their own house, but it would be unseemly for the head of the Executive branch to spend too much time in the fiefdom of the Legislative branch. Nonetheless, it has happened. The stories of Presidents John Adams and Thomas Jefferson, and how they came to live – if briefly – on Capitol Hill, have been told numerous times. I recently discovered that another President had lived there: The eminently forgettable Chester Arthur.

General Benjamin Butler, who rose to prominence as a Union officer during the Civil War, spent much of his later life as a politician, including numerous terms in the House of Representatives. While in Washington, he built two houses at the corner of B Street (today Independence Avenue) and New Jersey Avenue, Southeast. Butler did not live in them, but rather rented them out. They were favored by wealthy Congressmen, and John P. Jones, who had made his pile in mining before moving into politics, representing Nevada since 1873, was a perfect candidate.

In 1881, James Garfield was sworn in as President, while Chester Arthur was sworn in as Vice-President. Arthur had never before held political office, though his post as Collector of the Port of New York had kept him in the midst of political intrigue for many years.

Arthur was thus not exactly the best-qualified to take over as President, but was thrust into that position when Garfield died on September 19, 1881. Arthur was sworn in as President in New York, where he had spent most of his career as Vice President, then returned to Washington – where he was sworn in a second time.

Arthur’s first decision as President was to order a remodeling of the White House, a job so complete that it was necessary for him to move out. He thus found refuge from the noise and dust at the home of John P. Jones. 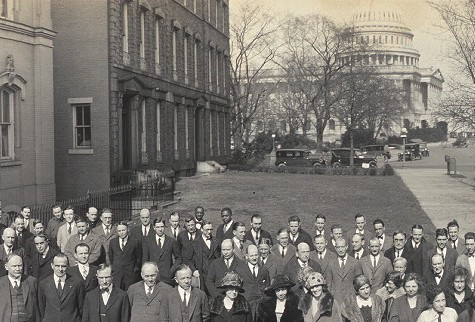 Detail of a 1925 picture showing Coast and Geodectic Survey employees in front of the Butler building, at center-left. (LOC)

For the next couple of months, while such modifications as a screen made by Louis Tiffany was added to the White House, Arthur ran the country from Capitol Hill.

Benjamin Butler, who still owned the house, died in 1893. Shortly thereafter, the house was taken over by the Coast and Geodetic survey, and they used it for the next 30 years. It was torn down in 1929, thus going the same way that the houses that Presidents Adams and Jefferson had inhabited on the Hill. Four years later, the Longworth House Office Building was opened for business on the spot where a President once lived.