I have written before of the Old Capitol, both here and in my book , particularly its original use as a temporary building for use by Congress while their real building was rebuilt, as well as its use as a prison during the Civil War; but I came across a short article the other day that makes it worth revisiting this subject.

The article, which appeared in the National Republican on November 30, 1865, consisted mainly of three large headlines: “Old Capitol Prison to be Vacated and Closed,” “Disposition of Prisoners Preparatory to the Restoration of the Writ of Habeas Corpus,” and “Reduction of General Baker’s Detective Force Preparatory to its Total Abolition.” The whole article thereafter consisted of exactly four sentences, which rehashed the headlines without adding any detail, other than the editorial comment that, “this is prompt action in the right direction.”

Abraham Lincoln had originally suspended Habeas Corpus – ie, the right to be released from illegal imprisonment – during the Copperhead (Southern sympathizers) riots in Baltimore. This occurred in April, 1861. Though strongly fought over in the courts, and eventually rescinded, it set up a further – and much broader – suspension in September 1863.

This did not change until Andrew Johnson issued a proclamation stating that there was no longer a reason for the suspension, and so it would now be “revoked and annulled” – except for “the States of Virginia, Kentucky, Tennessee, North Carolina, South Carolina, Georgia, Florida, Alabama, Mississippi, Louisiana, Arkansas and Texas, the District of Columbia, the Territories of New-Mexico and Arizona,” which really did not change much. 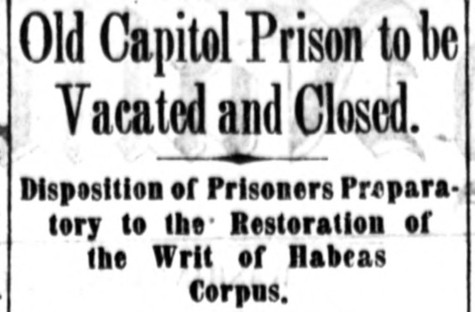 Nonetheless, it is clear that changes were afoot, and that the need for a prison for those who had been arrested and held under martial law was no longer necessary – and certainly not needed right across from the Capitol. But as if to underscore how small the changes actually were, the article also mentions that all those prisoners who were not either released or turned over to a civilian court were thus moved to Fort Whipple in Virginia – which is today Fort Myer, and thus just across the Potomac River.

And with that, the Old Capitol finally could relinquish its unpleasant role, and return to being an unused, old government building. And that was worth the large headlines in the newspaper of the day.