And the Hine saga continues 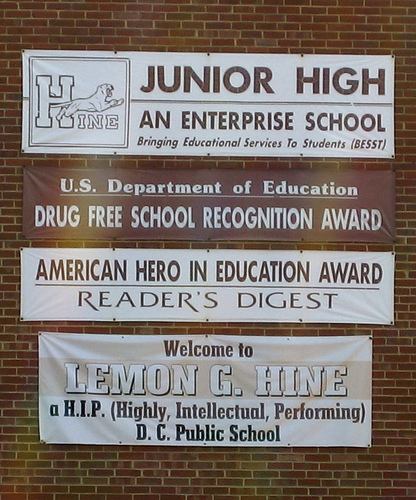 I have been tempted for some time to start a pool on when ground will actually be broken on the Hine School.  It’s been a long uphill battle for all sides, and tonight brings meeting number 9,876,008,999…or something like that.

The short recap for anyone who just moved here: the Hine School was closed in 2007 due to low attendance and numerous other issues.  The city called for plans to develop the land in a way that would bring in tax revenue while also providing retail, housing, parking, etc.  The neighbors asked that the size and design need to fit in with the surrounding area…an aspect of the project that has led to the majority of the disagreements. You can catch up by reading our past coverage here.

So tonight you have another chance to hear it all and to voice your own opinions.  The Eastern Market Metro Community Association (EMMCA) is hosting a meeting between Tommy Wells and residents to discuss their concerns “about the current proposal to develop the block north of Pennsylvania Avenue between 7th and 8th Streets.”

2 responses to “And the Hine saga continues”