Today, the Capitol seems an pristine, inviolate building, surrounded by further government buildings. Inside are only those intent on running the country – or touring the building.

But it was not always thus. For about a year, the Capitol, far from producing only laws and regulations, also regularly produced…bread. Today we look at this odd chapter in our history.

The time was, of course, the Civil War. Due to Washington’s precarious position between the two fronts, it rapidly was turned into an armed encampment. Every spare large building was turned into either barracks or a hospital. Every open field was used to graze livestock. And even the Capitol was turned into a barracks.

Bread had originally been supplied by civilian contractors, but the quality of bread they offered was poor at best. Fortunately, one of the men barracked in the Senate Chamber of the Capitol was one Lieutenant T.J. Cate of the 6th Massachusetts Regiment. Cate was an experienced mason, and he was asked to build a ovens in the basement of the Capitol. After showing his mettle by building two ovens in the room of the Committee on Printing, Cate was detailed a number of men, and together they built ovens in every room in the basement. When everything was working properly, their 14 ovens could bake 60,000 rations in 24 hours, though it was usually more on the order of 45,000 loaves. 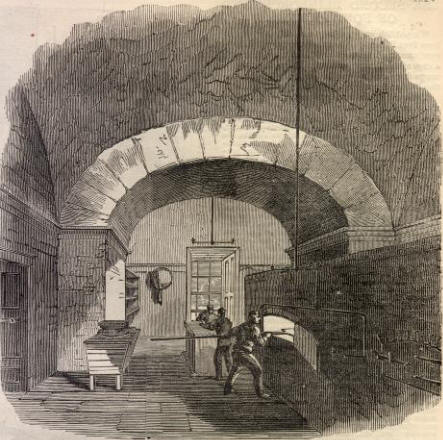 Etching showing the ovens in the Capitol in action, printed in Harper's Magazine (Son of the South)

The fame of this new enterprise spread rapidly, and one day none other than President Lincoln appeared in the bakery, along with Senator Henry Wilson of Massachusetts. Cate describes what followed in an account published in The New England Magazine in 1905:

I conducted them through the plant, and while in the bread room I took up and broke open a loaf of bread. The President took it from my hand, turned it over, and addressing Senator Wilson, said, “Well! If the man who bakes this bread is as good as the bread, he is a pretty good kind of a man.”

Lincoln admiration of the bread prompted Cates to send a pan of it to the White House every week, where it soon became a regular part of the meals.

There was just one problem with these ovens: The enormous amount of smoke they generated did the Capitol no good whatsoever. In particular, books and art owned by the Library of Congress (still located in the Capitol at the time) were being damaged.

In July, 1862, Congress appropriated the money to remove the ovens, but just the appropriation was not enough. Finally, on October 14, Lincoln himself ordered their removals, and the Capitol returned to its previous, smoke-free, status.