Sober Discussion on Moratorium in 6B 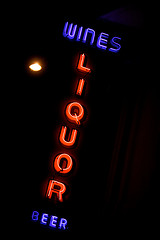 Last night at Brent Elementary, ANC 6B’s Norman Metzger moderated a panel experienced in the process and effects of moratoriums on different types of business licenses related to alcohol.  The issue has been raised because of concern about the number of bars and restaurants on Barracks Row as there’s an appearance of declining retail.  The panel included:

Moosally gave an overview of how a moratorium is requested (usually by recommendation of an ANC with input from the Councilmember and MPD, though the process can first begin with a group of five residents or a civic association), how long it lasts (generally 5, but can also be 3 years), and the area it covers (a 600 ft. to 1800 ft. radius from the center point).  According to ABRA’s Moratorium Fact Sheet, the requester must also include the reasons why a moratorium is appropriate under at least two of the four appropriateness standards, which are:

Mossally also noted that while some existing moratoriums are being renewed for 3 years, there have not recently been new moratorium requests, aside from requests to cease the sale of singles from convenience and liquor stores.

Each Commissioner shared their unique experiences with how a moratorium impacted their community and perceptions of the business environment.  Experiences varied, but one conclusion that could be drawn was that a moratorium was not the single answer to any problem.  Blumenthal and Jacobson both noted that moratoriums were perceived to exacerbate problems with filling empty storefronts, though both confirmed that its almost impossible to tell what role, if any, a moratorium may play.  Blumenthal shared that initially, following the moratorium in Glover Park, it seemed to be “business as usual” but as businesses closed (for whatever reason) several storefronts sat vacant.  So while the moratorium helped with problems in the evening, they are now going to study why there are empty retail spaces.  Moretti said that in Adams Morgan they have seen similar issues with vacancies, but sees it as more of a problem to be addressed with landlords, who are oftentimes charging prohibitively high rents.

Moretti, Weaver and Jacobson emphasized that it’s important to first establish what it is that you want to accomplish and then look at the variety of tools available.  Moretti and Weaver pointed out that improvements in Adams Morgan have come about by simply enforcing existing statue.  By way of example, Weaver pointed out that Heaven and Hell, well known as a nightclub that rarely if ever serves food, was operating under a restaurant license when clearly they should have a tavern license.

Jacobson suggested that when there are problems with crime and violence in the target area, then a moratorium may be at the top of the list for consideration, but if the objective is to attract a wider variety of businesses then it may not be ideal.  In that case, he offered, “rather than say ‘No’ to restaurants and bars, find ways to say ‘Yes’ to retail.”  He’s currently working with Councilmember Evans to craft tax incentives designed to foster local retailers.  It was pointed out that similar models have been successful for neighborhoods in New York City and Cleveland.  Currently the District only offers deferments.

One questioner said that approximately 20% of Barracks Row businesses have a license to serve alcohol.  Given their perspective, Weaver and Moretti said that sounds almost ideal to them, though they know that nobody wants to be the next Adams Morgan.  Even THEY don’t want to be the next Adams Morgan.  Additionally, Weaver counseled, “find the exact area where you want to concentrate and focus there.  The worst thing you can do would be to overreact to growth.”

Ultimately, the Commissioners found that moratoriums achieved some goals, but also raised other issues. They certainly couldn’t say it helped attract more retail.  It has given ANCs leverage to negotiate with operators, which is helpful in cases where there are bad actors, but all the panelists said they’ve had the most success addressing problems by liberally engaging good operators, community members and landlords.  Also, most of the problems discussed seemed to come from taverns (or properties licensed as restaurants but actually operating as taverns).  In the case of Barracks Row, of 22 establishments licensed to sell alcohol, only 6 are categorized as taverns with three (Old Siam, Cava, Lola’s) not really operating in the “tavern model” (the others are Jordan’s — which I’d consider borderline — Phase I and Bachelor’s Mill).  There are currently six pending licenses: 8th Street Bar & Grill and Bavarian Beer Garden are applying as taverns; the others, Pacifico, Nooshi, Moby Dick’s and Senarts, are applying as restaurants.

Chuck Burger, local resident and a former chair of the Alcoholic Beverage Commission, shared his view of the meeting: “Tonight we see that there are many ways to craft a solution.  This meeting was a great start to developing an informed community dialogue.”  Commissioner Metzger was pleased with the process.  “We had a good meeting with very substantial questions from the audience that probed many important issues.  By no means did we make any decisions about a moratorium tonight; that’s not what this was for.  But I think people came away understanding there’s no such thing as a [single type of] moratorium.  Of critical importance will be continuing to engage the community.”

The Retail Mix Task Force will meet again Monday, December 13th.  Commissioner Metzger said they may have a preliminary report by February.  Larry Janezich of the Eastern Market Metro Community Association also attended last night’s meeting and has a summary on their website.

8 responses to “Sober Discussion on Moratorium in 6B”