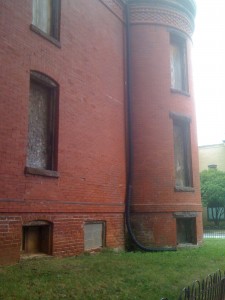 It stands as a monument to blight.  What presumably was once a stately home has been left to deteriorate for over a decade.  If you’ve ever walked by the corner of 10th & C, NE, you know the house I’m talking about.  It’s a large home, occupying a prominent corner and it is in absolutely shameful condition.

Every window is boarded up, the front door is two pieces of plywood with a chain.  Yet, even in this condition it sparks the imagination.  I don’t know a single developer, real estate agent or nearby homeowner, for that matter, that hasn’t spent some time fantasizing how they’d renovate.  Then there are the entrepreneurs who dream of opening a shop downstairs while living upstairs.

So what exactly is going on with 1000 C Street, NE?  Read on to find out about this house and what you can do when there’s vacant property in your neighborhood. 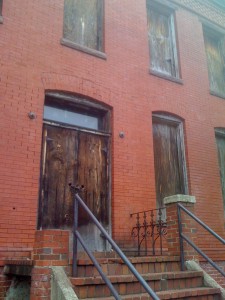 Finding concrete information about how this house came to be in such a condition is difficult.  Living only a couple of blocks away, it has come up in conversation plenty of times and I’ve heard several rumors, from it being the result of a tax sale gone wrong or a family feud or maybe the result of a will caught up in probate.  The most detailed explanation I’ve heard is that the owner wanted to break it up into condos but couldn’t get the permits, so decided he’d thumb his nose at the city and the neighborhood by allowing the home to sit vacant and decline.  Whether some, all or none of this is true is uncertain.  (If you live nearby and have any more information, please share it in the Comments.)

What I do know from credible resources is that the home has been empty for around 15 years, it has been the subject of some litigation (though its nature is unclear), and it is currently being used as storage.  City records show it is owned by an LLC, Tenth and C Street Associates, and its assessed value is $423,500.

Though I can’t explain exactly why this house is vacant, I can tell you that the owners have received some motivating news.  The house has been categorized as “blighted” which means the owners must pay a 10% property tax.  Based on the assessed value, that’s a $42,350 tax bill.  By comparison, at the regular residential property tax rate of 0.85% the bill would have been $3,600.  The owners have been subject to the higher rate before, but have somehow managed to use their two available exemptions to defer.  Finally, they will be forced to either literally pay the price for marring the neighborhood or sell to someone interested in making the house an asset to the block.  Vermin and shady lurkers beware.

According to the Property Information Verification System, on August 6th the owners applied for and received a permit to “replace the windows in accordance with historic standards”.  Whether or not that is good news remains to be seen.  One indication of a blighted property is boarded up windows.  If the owners do replace the windows, it may only be a ploy to get off the blighted list.  They also applied for permits in 2005 and 2006 to do pointing and masonry work, but it didn’t result in any appreciable improvement.  In fact, Department of Consumer and Regulatory Affairs records show complaints about this house first dating from 2002, so improvements applied for in 2005 may have been an earlier attempt to avoid the higher tax.

It may have taken several years to get to this point with 1000 C, but the process does work.  This summer I walked my Single Member District to check the status of homes listed as vacant or blighted and found that in the year since the current blighted tax has been in effect, 68% of the properties on the list have been renovated and are now occupied.

What can you do if there is a vacant or blighted house on your block?  First, a couple of definitions.  A vacant property is one that has been unoccupied for 30 days and the owner does not intend to occupy it.  A blighted property is one that is vacant and, for example, has broken or boarded up windows; is not weather-tight or secured against the entry of birds, vermin or trespassers; has graffiti; or exposed surfaces are not protected from the elements, i.e., its unpainted or has peeling paint.  Currently there is only the 10% tax rate for blighted properties, but in its recently passed budget the Council reinstated a vacant property tax rate of 5% which will go into effect in the spring of 2011.

In the meantime, these properties that are hazards to our neighborhoods can only be penalized if they’re reported.  The Department of Consumer and Regulatory Affairs (DCRA) vacant property page has a phone number and email for reporting the properties.  Your ANC representative can also be very helpful, so include them on your correspondence.  Believe me, you’ll be much happier walking by or living next to a real neighbor instead of a shabby shell.