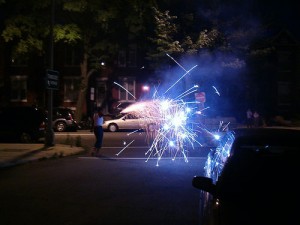 I know, I know… I’m a terrible American. I don’t like ice cream, Rice Crispy treats or s’mores either. Get over it.

As a child, the loud “bang, zoom” of a firework exploding terrified me. Even ear plugs couldn’t make me a willing participant in my hometown’s yearly Independence Day festivities.

As a teenager, I took to heart the horror stories my father, the town fire chief, told us kids. Most stories ended with someone starting a brush fire or losing a limb, yet my dad couldn’t understand why I didn’t warm up to professional fireworks displays.

When I moved to Capitol Hill, I was introduced to a whole new fear: fireworks in a crowded city setting.

My first July 4th on the Hill scared the sh*t out of me. Imagine naïve me, sitting in the basement with my husband thinking that the noise we heard was from the festivities on the National Mall. When we walk outside to see if we can get a glimpse of the Capitol dome we are immediately overcome by the smoke from the fireworks display going off on our street, next to cars with tanks filled with gasoline.

I called the police, and would keep calling for the next few hours. That night, and on subsequent holidays, I learned the nothing could or would stop the displays, not even the police cruisers that drove down the smoke-filled street.

Before you tell me to move to Canada, hear me out. We all complain or call the police when we see something illegal happening in our neighborhood—the guy breaking into a neighbor’s shed, the driver completely disregarding the stop sign, the bike riding on the sidewalk in the Central Business District—but when it comes to fireworks, a majority of us look the other way, or at least to the sky to enjoy the show.

With the exception of a few explosives, most of the DIY displays on the Hill are illegal, yet you sit out front and watch in delight or stop by the many stands that pop up around the city selling fireworks. Why is that? Don’t you know that you could lose a limb!?

45 responses to “I Hate Fireworks”