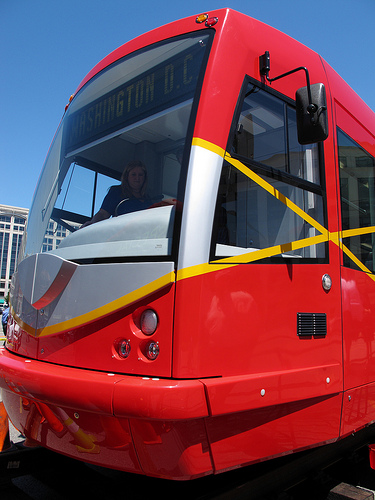 image uploaded by Mr. T in DC on Flickr

According to a Greater Greater Washington post this morning, the Chair of the DC City Council (and mayoral candidate), Vincent Gray, eliminated virtually all of the funding necessary for the H Street/Benning Road Streetcar line, which is halfway completed.

Sources at the council are reporting surprise this morning as they opened the budget and saw the cuts which only leaves a few million dollars — not enough to pay for the cars needed to run on the tracks, the terminal points, or the connection to Union Station — which puts in serious jeopardy the federal grant application to extend the line down Benning Road into Ward 7.

If you would like to call to voice your support for Streetcars, Gray’s office number is 202-724-8032.  To Email: vgray@dccouncil.us.

Latest reports from streetcar supporters calling Gray’s office are indicating that his office is now working to restore the funding. Now the Chairman is saying he is cutting all capital investment in streetcars and that he wants the city to spend more time studying and designing streetcars.

Gray’s budget will delay streetcars by a minimum of 2 years. As on now the earliest the cars would run would be 2014.

Admittedly I have a personal stake in this as a long time H Street neighbor and as an employee of the Atlas Performing Arts Center. But I’m not the only one who took a chance on the promise of streetcars and the change they could bring.   This decision has some potentially devastating repercussions — residential values, commercial investments, etc.  Talk about a short-sighted move!

Tracks have been laid, sidewalks torn up, business dramatically affected. As I wrote in a post to the Moms on the Hill earlier today, H Street development has come so far. The new businesses and theatres are here because of that promise and a dream for the future. Elimination of this project now while tracks are being laid would be devastating for the neighborhood specifically of course but think also of what that broken promise says about our city. Imagine crossing those empty tracks for years and how demoralizing that would be.

THIH will keep you posted.

UPDATE: The budget, with the streetcar cuts, just passed.

UPDATE: Ward 6 Council Member Tommy Wells voted against the budget because of the streetcar cuts.  They may be able to do something with an amendment this afternoon. Call or email Kwame Browns’ office (202) 724-8174 kbrown@dccouncil.us

UPDATE: DCist has more details in their latest post.

UPDATE: It looks like the $47 has been found to restore the project. More info at Greater Greater Washington.