With the current discussions about street cars in DC, it seemed only appropriate to look at some past forms of public transportation on Capitol Hill, and I’ve always been intrigued by the Blue Castle, which sits at the end of 8th Street SE near the Navy Yard. As it was once the terminus of a short-lived cable car system in DC, it seemed an obvious choice for a history column. Join me today as I look into the past of this brightly-colored Hill landmark.

The Washington and Georgetown Railroad was founded in 1862, and ran two major lines through DC: one on 7th Street, SW north to Boundary Street (now Florida Avenue) and one from 8th and M Streets, SE up to Pennsylvania Avenue, then along Pennsylvania all the way to Georgetown. The carriages were horse-drawn, but ran on tracks, a significant improvement over the previous public transportation system, which simply were horse-drawn carriages that ran directly on the public streets.

On March 2, 1890, the DC Appropriations bill (more correctly “An act making appropriations to provide for the expenses of the government of the District of Columbia for the fiscal year ending June thirtieth, eighteen hundred and ninety, and for other purposes.”) (50th Congress, 2nd session, Chap. 370) stated that all streetcar companies would be allowed to begin running cars by batteries, underground electrical wires, or underground cables. All those who did not take advantage of this in the subsequent two years would thereafter be required to do so.

The Washington and Georgetown Railway chose to go with underground cables, and built a power house at 14th and E, NW, and on April 7, 1890, the first cable car began operating on the 7th Street line. On September 13, 1891, the Sunday Herald reported that a building permit for a two-story brick car house had been issued. The newspaper also stated that the new car-house “will be the finest structure in the vicinity.” Although officially the Washington and Georgetown Railroad Car House, it was usually known simply as the Navy Yard Car Barn. The building was designed by the Kansas City architect Walter C. Root, who was the younger brother of John W. Root, of Burnham & Root. It was designed in the Romanesque Revival style. The building was used to turn around the cars and readying them for their next trip through DC.

On August 4, 1892, the Sunday Herald described the laying of the cable:

The Washington and Georgetown Street Railroad Company are using every exertion to have their cars running in time for the National Encampment, when every facility for transporting the public about the city will be taxed to the utmost. On Wednesday night the cable was laid from the power-house on Fourteenth street to the Georgetown end of the line. This cable is 23,600 feet long, and was laid between 1 and 4 o’clock in the morning. The section of cable running to the Navy yard was also laid last week. This cable is longer than the Georgetown end, being 31,700 feet long. How these cables were to be gotten inside the track was a mystery to the uninitiated until they saw the operation. The cable is wound on a big spool at the power house, which is on an axle. Forty horses were hitched to the end of the wire cable, and when they started on their journey the cable unwound from the spool as they advanced. But a few thousand feet of the cable weighs enormously, and although it runs over numerous wheels, as it pays out it becomes hard to drag. Consequently relays of horses were stationed along the route, and as the cable was dragged along more horses were hitched to it, and in this manner the work was easily accomplished.

Two weeks later, and well before the National Encampment – a reunion of veterans of the Civil War which took place that year on September 20th – the cable cars were running from the Navy Yard to Georgetown.
Just over three years later, the Washington and Georgetown Railroad was bought by the Rock Creek Railway, forming the Capital Traction company. 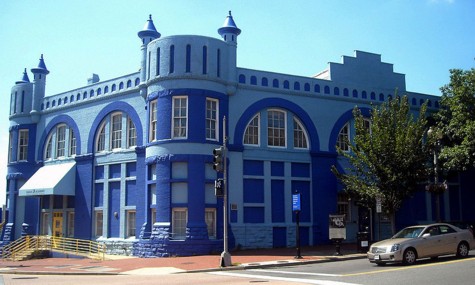 Picture by AgnosticPreachersKid from Wikimedia

On September 27, 1897, the power house at 14th and E burned. This had two consequences: first, the Capital Traction Company switched from cable cars to electric, and second, the District government bought the land on which the power house had stood, and elected to build the District Building (today the Wilson building) there, for use by the DC government.

With the dropping of cable cars, the Navy Yard Car Barn ceased being as important, and soon became simply a storage shed. In 1902, it was the site of a gruesome attack, when Henry Dorsey struck Matthew Kent over the head with an iron bar. Both men worked for the Capital Traction Company. The newspaper account of the day does not mention the subject of the argument the two were having that preceded the attack. Fifteen years later, the car barn was in the news again after a car coming out of the barn ran into an automobile, maiming one of the occupants.  Ultimately, the Capital Traction Company went out of business during the Great Depression, and the Navy Yard Car Barn became a bus garage.

In 2006, the building was added to the National Register of Historic Places, mainly because it is the last building in DC relating to the cable car era. Somewhere along the line, it was painted the current blue color scheme. Today, it houses two charter schools, who have a lease until 2012. At that time, the current owner plans to turn it into a mixed-use development.