THIH Podcast: Where The Streetcar Started and Where it May Go, Part 1 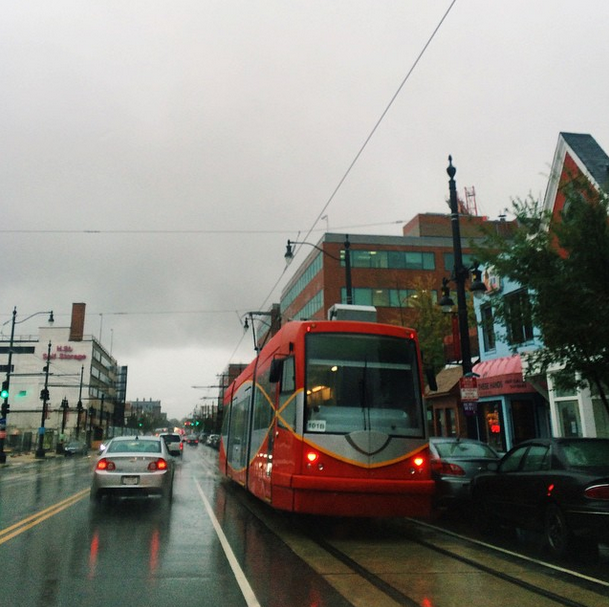 Looks like the DC Streetcar is back for another round of testing! After going on daily runs during the fall of 2014 and part of winter, 2015, the DC Government took the cars off the streets while DDOT Director Leif Dormsjo ran a review. Once the green light was given, there was still no clear timeline as to when the cheerful red cars would return to doing their ghost runs.

The wait seemed to be over yesterday afternoon: the streetcar is back to testing mode. Appropriately, traffic on H Street NE was just a little snagged and no one seemed to be sure what to expect. Here at The Hill is Home, we’ve been wondering about the DC Streetcar. Jen DeMayo and I conducted a series of interviews in late March and early April of this year on the subject. It all started when we were frustrated by the delays and the possibility that the project would have the same fate as the Columbia Pike trolley encountered; after a while, it became an interesting topic that intersects many different aspects of our ward’s and city’s culture. This is the first installment:

Below you can find a complete transcript of this first podcast.

Maria: The DC Streetcar: love it or hate it, has become a polarizing project in DC. Although most Ward 6 residents look forward to the grand opening – and have, for many years– the rest of the city swings between gentle mocking and open sneering.

Here at The Hill is Home we thought our Ward 6 community, as well as the rest of the city, needed a document of where the streetcar started and where it may go. For this purpose, we enlisted the help of Ward 6 Councilmember Charles Allen, H Street Main Street Executive Director Anwar Saleem, historian Robert Pohl, and Citylab columnist Kriston Capps.

Robert Pohl: My name is Robert Pohl. I am a stay-at-home dad and historian  and I’ve been researching Capitol Hill for years, ever since I started researching the history of my own house and discovered the connections that the people that lived here or owned the property had across the Hill and of course across the city.

Kriston Capps: Hi My name is Kriston Capps. I’m a staff writer for City Lab. City Lab is the urbanism channel for The Atlantic. We cover housing, transit and other city-related issues.

Robert: There’s always been some kind of some kind of public transportation of that nature. Of course first there was a um a horse-drawn carriage that ran between the Capitol and Georgetown so that wasn’t terribly useful, especially as it only ran like twice a day or something like that. So it wasn’t until the Civil War that more started to show up and and of course there was a huge need during the Civil War… enormous amounts of people moved here, the city was growing, you could no longer sort of live in directly next to where you worked, which for the first 60 years was the norm here in DC. I probably, most places. Um, if you couldn’t walk there… you weren’t gonna go.

Kriston: Well, my understanding of the streetcar system in DC is that when it was first proposed, the city wanted to accomplish two things, which was build a transit, a new transit infrastructure, a new transit system and to spur development along a few key target corridors. Well, it’s done the one thing; or it may have done the one thing. You look along H Street corridor where they built the streetcar and you see a lot of new businesses, a lot of restaurants. You see a lot, a few new developments, and you’ve seen a lot of investment and home sales in that area. Now, it’s kind of difficult to tease out how much of that was the streetcar. Joe Englert, who opened a lot of bars there, says he would’ve done it anyway, but who knows?

Anwar: Well, years ago, Karina Ricks was director of planning and we went through the whole planning scenario for H Street. Ward 8 was going through the tour, through the whole country, to see what they thought about the streetcar and what they wanted it or not. And I was invited on that tour; I didn’t go. And um, they um came back and they said that they didn’t want the streetcar because they thought it was the streets was too narrow. And all I could do at that time was to grin and I couldn’t wait to talk to Anthony Williams and Ricks and say, “look can we have it?” And she said, “are you serious?” I said, “yeah I think we need a streetcar. I think it would be good for H Street.” I said I thought it would be good for tourism, something different, something that would help strengthen our economic development. And then about a month and a half later, um, Anthony Williams came back to me and said, “you want the streetcar?” I said yeah. “Looks like you’re gonna get it.”

Charles: It was mayor Williams who got the ball rolling by making the commitment to see the streetcar be expanded or be created on H st and Benning Road, and so a lot of initial work really came through his leadership and his administration. And then it was about 8 years ago when a lot of us gathered along H Street pretty much at the Starburst intersection and put a shovel in the ground to start the work to help create the H St and Benning Road streetscape redesign, which also included the tracks to lay the groundwork for the street car. And then as everyone knows the story, it has now spanned multiple administrations and I think no less than 5 DDOT directors so… 4 mayors, 5 DDOT directors and we are still working to have the H Street and Benning Road lines run.

Anwar: Now when it comes to um, when it comes to the administration, I think the administration has had their own problems. And they have their own system because you’ve had over sixty records and many many mant other staff and countless staff changes. So has there been consistency, on their part? No. There hasn’t been. And everybody come in with a different mindset, a different idea, when’s it going to start, what’s it need, how’s it going to be designed? And you think you have one specific design, everyone wants to follow. It didn’t happen.

Kriston: Since the plan was, you know, initially debuted, it has been shaved down. So that it extends from Oklahoma Avenue, which is not a major transit thoroughfare, Oklahoma and Benning, to a point over the Hopscotch Bridge. So, it’s… those are just not two places that you really need to go. And when you look on that line, when you look along that general stretch, you see, of course, the very successful X2 bus that goes from Benning Road and Minnesota Avenue, where there is a Metro station, ah, all the way through downtown. And that means that it’s taking people from where they live, east of the river, and kind of the entire transit shed  in Northeast through downtown to the places where they work. Now that’s what makes it… that’s what gives it one of the most successful capture rates, um, in the city.

Charles: People are by and large wanting to see the H St. and Benning Line succeed, but they are asking very reasonable questions of “How do we make sure that it is done right?”, “How do we look at mistakes that were made in the past and learn from those?” and then a real question of “How do we create a streetcar network for the city and how do you actually mix that into the other needs that we have?” whether that’s bus or other type of transit, that to help serve our needs.

Maria: So how do we create a real streetcar network for the city, and one that dovetails with the existing infrastructure and needs of the District? More importantly, is it worth it to invest in this kind of transportation? We hope you liked this podcast and that you’ll join us for our next installment, especially since it features a ghost story.

My name is María Helena Carey. Thank you for listening.

One response to “THIH Podcast: Where The Streetcar Started and Where it May Go, Part 1”