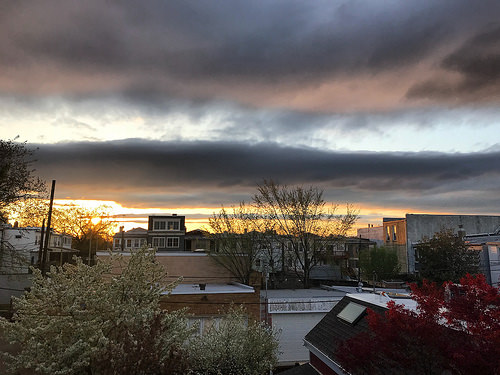 Today’s morning sky by Jim Havard, via our Flickr Pool

Catch up with more Capitol Riverfront-area tidbits over at JDLand

At 16, my dietary choices were not the soundest (#?); however, I did have strong political opinions. I could also drive a car. WAMU

An opinion in the Washington Informer makes a good case for letting younger people vote, as long as they educate themselves on the issues.

Using the word “Apartheid” as applied to DC schools is too strong– or is it? Common Dreams doesn’t think so. The comparison between Brent and Orr Elementary schools will make you uncomfortable.

Sometimes the worst disasters can bring about the best of times. A different take on the life in post-1968 Washington. Washington Post

Still “mulling over” that Amazon HQ2. It would be nice to have more transparency, overall. WCP

Church and State will close forever at the end of this month –but what’s coming is another great *secret* concept. Eater

You will be missed, Officer Shaw. Thank you for keeping us safe. Washington Post

We have two of the trendiest wine spots in the District. Because of course! Washingtonian

In citywide news, Metro might be introducing a mobile app to pay for your fare, among other techs developments. Cue the thought pieces focusing on how this app might disadvantaged groups. See also: Sweetgreen, no cash at. WMATA

MADabolic (some sort of aptly-named fitness studio that’s only missing an “i”) is coming to the Station House on H Street NE this fall. That’s great and all, but when is a Crate and Barrel or some sort of home goods store coming over this way? Washingtonian