I have written about manufacturers on the Hill numerous times in the past, and am always on the lookout for more companies that used to produce goods on the Hill. And I am continually surprised at the breadth of stuff that have been manufactured on here. Today’s company represented a real surprise to me, however.

In the early days of the 20th Century, the number of car and truck manufacturers exploded. As the technology became better-understood and simpler, it seemed that anyone with some mechanical aptitude, extra space, and a few spare dollars opened a new plant to satisfy the rapidly-growing market for gas-powered conveyances. One of those who jumped on this bandwagon was Ward Willson Griffith.

Born in 1873, Griffith got into the coal as a young man. Four years after marrying Alberta Beall (possibly of the famous MD/DC Beall family) he founded his firm on, according his Washington Post obituary, H Street NE, or according to the city directories of the time, 1603 Florida Avenue. Which actually does not exist – by 16th Street, Florida Avenue is Benning Road.

Either way, he was apparently quite successful, and could buy more land a few years later in 1911, at the intersection of N Street and New York Avenue in the northeast quadrant of the city. This is, admittedly, about as far north as you can get in the city while still staying within the most loosely defined confines of Capitol Hill. And if he had just stuck with coal and ice sales, his business would hardly be worthy of discussion in terms of the neighborhood.

But, instead, Mr. Griffith decided to branch out. And not just into, say, milk, but into a whole new line of business: That of making trucks. Real, live gasoline burning trucks produced under the name Witt Will. And quite successfully, too. His second year in operation, one of his vehicles even won a prize. That it was 5th place in the decorated division of the Labor Day motor truck parade is really not relevant here. Much more important is that his float depicting “Old King Coal and his fiddlers three” beat out numerous other displays in the eyes of Representative A. W. Lafferty and his fellow judges. 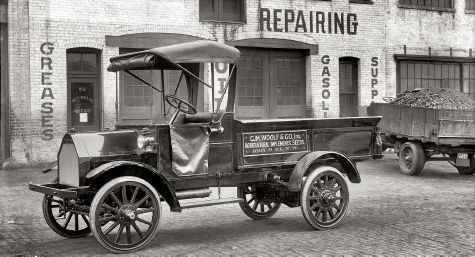 A Will Witt truck in front of the company’s HQ ca 1915. The truck belongs to a company on Constitution Avenue NW, today’s Federal Triangle (Shorpy’s)

A few years later, Griffith stepped aside from the day-to-day operation of his truck business to concentrate on coal and ice. The truck business was continued by the Witt Will Corporation, which was formed to do so. As such, they remained in the news frequently, selling their wares to companies up and down the East Coast, often modifying the vehicle for special duties, such as ice or coal delivery. At the same time, the business expanded into truck repair as well.

With the onset of the Great Depression, the truck manufacturing business went into the same tailspin that affected so many other factories at the time. Fortunately, Witt Will could continue as a repair shop, and, in fact, managed to do so for over 20 years.

The end came in 1955, when an enormous fire swept through the works – still located at N Street and New York Avenue. A four-alarm fire broke out, a fire that not only injured four fire fighters sent to battle it, but snarled traffic on North Capitol Street. The fact that their predicament made the front page of the Washington Post the next morning must have been small comfort to the owners of the business. As it was, they disappear from the record immediately after, and the Witt Will Company, a fixture of Capitol Hill since 1911, was no more.