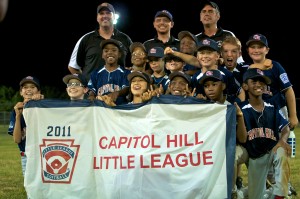 Today, Capitol Hill, you should walk with your head held high.  The 9 and 10 year old all stars of our local little league secured the DC Championship in a come-from-behind victory that was positively cinematic.  Last night they faced the team representing the Northwest Little League and were down 7-2  in the top of the 6th inning. (A Little League game consists of only 6 innings, mercifully.)  Scoring 5 runs to tie, they went into an extra inning and scored 7 more to win the game.  The team was 3-0 for the tournament and, in my opinion, they sported the sharpest uniforms. Tomorrow they move on to the Maryland State Tournament where they will represent the District.

While the win was nice for many reasons such as citywide bragging rights and a precious day off before the start of yet another tournament tomorrow, for me it was special for much more sentimental reasons. Looking around last night the Hill kids had the far bigger cheering section. They drew a crowd made up of not only their families but of lots of Capitol Hill fans. There were kids and adults who were there to support the team because they love base ball and they love Capitol Hill. The community spirit was everywhere.  Another reason why I can never, ever move.

The Capitol Hill Little League is quite young, this is only its second season. President Seth Shapiro expressed the joy felt by many when he said, ” Wow! Just Wow! What a game. What a team. What a League and what a fantastic community! MD, ready or not, here we come. ”

You still have a chance to support Capitol Hill! Tonight the 11 and 12 year olds take on Cap City Little League at 7pm at Fort Lincoln Rec Center, a short drive from the Hill. They are sporting the same sharp red, white and blue uniforms.

Jen DeMayo is a mom to both a member of the winning team and to its loudest cheerleader.