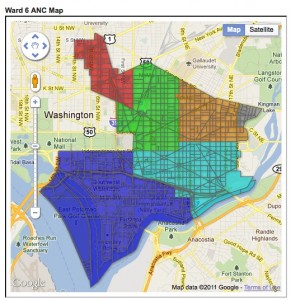 On Monday evening the Ward 6 redistricting task force voted on its final submission for Advisory Neighborhood Commission (ANC) and Single Member District (SMD) boundaries.  The task force’s recommendation can be found HERE. It was forwarded to Councilmember Wells on September 28, who will in turn submit it to the Council on September 30th.

The evening’s vote capped a series of 10 public meetings and six Advisory Neighborhood Commission meetings where lines were debated and discussed.  In addition, there was an active Ward 6 Task Force blog where task force members, residents, and commissioners, proposed maps and weighed in on the minutiae of various issues being considered.

Here is where we stray from strictly conveying facts to the murky area of perception. And, rather than our traditional practice of disclosing affiliations at the end of a blog post, I’m stating right now that I’m a commissioner for ANC 6A05. If you’d like to leave comments below about how it is a conflict of interest for me to write about this, know that I couldn’t possibly get any of our other writers to attend these meetings so it was either me or nobody.

So what happened?  There were all kinds of dramatic proposals, including a Hill East ANC that got plenty of people stirred up.  Ultimately, though, the task force chose to go with a status quo philosophy, making adjustments here and there to account for population changes but not making any big adjustments unless there were unusual or compelling circumstances.  Most of the time, the process just felt like “The 6B and 6C Show.” 6B made a case for expanding boundaries from their current domain over Eastern Market and Barracks Row to include the Riverfront and stadium. (Yikes! Didn’t happen.)

Instead, in an attempt to gain another SMD, from its area east of Union Station 6C was able to encroach over East Capitol into 6B and take blocks southward to Independence Avenue between the Capitol and 8th Street. This crossed what had previously been a traditional ANC line of demarcation. 6C also took blocks from 6A on the northeast, leaving one of our SMDs perilously short of the target 2,000 population per SMD and causing all kinds of havoc with us in 6A attempting to maintain our philosophy of sharing H Street between as many commissioners as is practical while also keeping compact neighborhood lines.

Boundary lines within and among ANCs were tenaciously debated, to say the least.  Many are still quite controversial and will continue to be at issue probably until the final stamp of approval is given.  The task force process appeared to be very transparent, such that you can visit their website and get a full history of the blow-by-blow, with every meeting preserved and every proposed map and community comment cataloged for all to see.

To provide a fuller picture, we have invited each ANC to share its own perspective and will publish those as we receive them.  Now, however, the process is in the hands of our councilmember .  For those that might be interested, he can be reached at 202-724-8072, and by email.

Sharee Lawler is Commissioner for ANC 6A05.  After publication this post was updated with contact information for the office of Councilmember Wells.