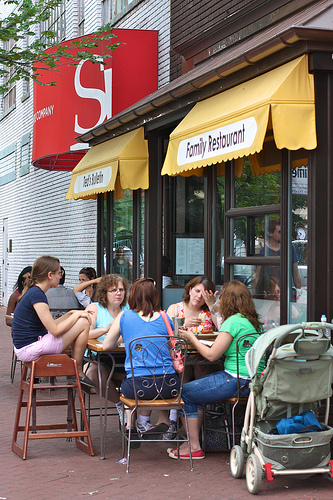 Photo by Maria Helena Carey, who's going to have to do without a Bananas Foster naughty milkshake this weekend. Grr.

I have to confess: I’m only doing the To Do List this week because none of our other writers volunteered to take it and I realized late last night that it wasn’t done.  In fairness, it’s kind of a daunting task, trying to figure out what’s going on in our little neighborhood and suggest things to you, our lovely readers.  So in the spirit of honesty, I haven’t the vaguest idea what’s going on this weekend.  I hear the weather is going to be quite nice though, so I would strongly recommend you get outside and enjoy it– perhaps on one of our neighborhood’s patios? (I think the most recent addition opened this week at the Liberty Tree on H Street!) And while I’m not inclined to tell you to where not to go, you might want to rethink your plans to hit Ted’s Bulletin this week – after President Obama’s lunch there yesterday, I’m guessing the wait this weekend might be a bit over the top.

So without doing too much research – because it’s late and I’m tired – off the top of my head, Hedwig and the Angry Inch is playing tonight at the Atlas. Or you could catch the gender-swapping version of The Importance of Being Earnest at the H Street Playhouse.  It’s also movie night at the Capitol Riverfront, where you can catch the Blind Side. (I liked the book better, but that’s just me.)

On Friday, you could check out lunch at the Pug (no idea what that entails, but it’s a Friday in August, so I’m thinking beer is a really good option) or Fruit Bat is serving lunch now too. (Lunch! It’s the new Dinner!) If the Sweet Lobby has rose macarons that day, I would definitely go get some of those because despite them kind of smelling like your grandma, they are crazy delicious.  You could take them down to the Riverfront for their evening concert series (I have no idea who’s playing – but does it really matter?) and eat them while you surreptitiously sip some wine and listen to some tunes.

If the weather lives up to the hype (yes, my friends hype the weather to me), you should just spend Saturday walking around enjoying it, grilling and sipping the adult beverage of your choice on your patio or hanging in one of our parks. The Atlas is showing Shrek (I’ve never seen it; I think the kids dig it) and “The Importance of Being Earnest” is again at the Playhouse.

Sunday is the Rock n’ Roll Hotel’s 5th Anniversary party.  It’s not sold out yet, but it probably will be soon.  I can’t believe it’s already been five years. Congratulations guys – and thanks for the role you play in our neighborhood!  Sunday nights are also karaoke at Banana Cafe, which has become a favorite spot for our Ward 6 v. Ward 7 karaoke showdowns – go practice and join us for the next one! If you’re more in the mood for Sunday Fun-Day, Capital City Diner has an unlimited mimosa brunch (as does the Argonaut, which is where you’ll find me on Sunday). Or, you could end your weekend with a trip to the Maine Avenue Seafood Market (technically outside of our coverage area) and bring some crabs home to enjoy before the summer is over!

So whatever you do, I hope you have a great weekend! And if you have something to add (because this is the least thoroughly researched To Do List ever), please, please do so in the comments!