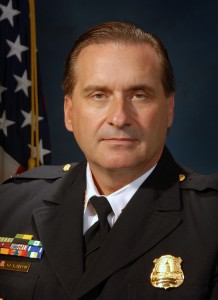 Commander David Kamperin, the highly-regarded MPD-1D (First Patrol District) Commander, who was both a classic commanding police official straight out of Central Casting in person, and a listserv and Internet-savvy presence in cyberspace, announced his retirement, set for May 21st.

Kamperin said his team has accomplished a few noteworthy things within the First District over his tenure –as a matter of fact, he  is always thanking his team, his colleagues, his own boss, Police Chief Cathy Lanier, and the strong citizen involvement here. They have, according to Kamperin, increased foot patrols throughout the community; decreased response time for calls for service; improved customer service; enhanced community policing within the Patrol Service Areas (PSA); and reduced crime on an annual basis. Last year, 2010, it was the MPD-1D  received the Department’s Crime Reduction Award.

“I have had the privilege of working with Commander Kamperin in many capacities over the past 20 years. He has always stood out as a dedicated, hard working, professional that knows how to fight crime and lead his team,” Lanier told me in an email. She added, “His service to the community in the First District has been exceptional; but nothing less than what we have always seen from him for more than two decades. He will be missed by all of us.”

Whether he was responding to citizens’ fears with appropriate information; holding a community meeting to address a spate of carjackings that rocked the neighborhood over a year ago; calming troubled waters after a series of violent attacks; organizing a multi-department response to drug activity; rounding up burglars; or even  recovering stolen goods; giving advice on nuisance issues like trash buildup, streetlights or parking issues during Snowmeggeddon or just allaying neighbors’ concerns about suspected gunfire via emails; Kamperin was involved in community crime affairs to an extraordinary level even when on vacation, as his many fans on the MPD-1D listserv can attest to.

Kamperin stated to them that he was leaving to “pursue a career and other interests within the private sector and to spend more time with my family…This was not an easy decision to leave a career and agency that I love so much and am so proud to have been a part of.  There is not much more in life that is more rewarding then being able to do what you love and are passionate about,” he stated.

The MPD-1D listserv comments were succinct and to the point, but still expressive of the fact that many people thought Kamperin was a prince of a public servant: “Commander you will be missed mightily.  Thank you so very much for your extraordinary responsiveness and your great service to the District of Columbia, and especially to the First District!  You are terrific and we wish you all the best in whatever you choose to do next,” stated Sarah von der Lippe, on behalf of herself and her family, in a post.

Looking ahead, Kamperin assured the public that he will work with his replacement and Lanier to ensure the transition to a new leader is seamless.

The Citizen Advisory Council (CAC) for 1D is planning a public event at their next scheduled meeting Tuesday, May 3rd at 6:30 pm in the MPD-1D community room at 101 M Street SW, where awards will be distributed and where Kamperin will say farewell to the community.  All are welcome.

The First District, “is the largest and most diverse area within the District of Columbia, incorporating public housing, the downtown business and commercial district, all professional sport venues, Federal Agencies, two military bases, the Smithsonian Museums, Capitol Hill and the White House,” according to the MPD.

So, what  is your favorite Kamperin-involvement story?  What qualities would you like to see in a new commander?

By Elizabeth Festa      No Comments