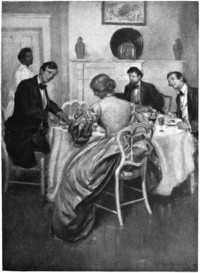 When Abraham Lincoln moved to Capitol Hill in 1847 as a freshman congressman from Illinois’s 7th district, he soon found lodging in Mrs. Sprigg’s Boardinghouse. Her house was the second from the north of a row of five houses fronting 1st Street SE, just across from the Capitol. Lincoln spent two years in this house, while struggling with the Mexican-American War, the post office, and, of course, the question of slavery. In spite of the gravity of the issues, the dining room in Mrs. Sprigg’s home was a happy place, with Lincoln enthralling his fellow Whigs over their landlady’s meals.

Sadly, the site of his refuge is now the Library of Congress, but follow me over the jump for more about this row of historic houses.

Duff Green's Row ca. 1880. A Street SE - now no longer extant - can be seen to the right and behind the buildings. (Library of Congress)

Daniel Carroll originally built the row, which ran from East Capitol St to A St SE, and so the buildings were known as Carroll Row. Carroll was a large landowner on Capitol Hill in the early years of the Capital; it was his house that Pierre L’Enfant had knocked down when it proved to be built on one of L’Enfant’s planned (but by no means built) streets. The house he ended up building was Duddington Manor, whose name remains on a small street and which will certainly be a subject for a future “Lost Capitol Hill” column.

The five houses were later bought by Duff Green, the editor of the United States Telegraph newspaper and it thus acquired the name “Duff Green’s Row.” Green actually lived in the southernmost house, and also took his meals at Mrs. Sprigg’s table.

The reason Lincoln moved here was that a number of other representatives, all Whigs, already lived there, making for lively dinner table conversation, especially once Lincoln got started. He quickly acquired a name as a story-teller, something he would also be known for in the mailroom of the House. Lincoln moved back to Illinois in 1849, leaving the Mrs. Sprigg’s a much quieter place.

During the Civil War, these houses were used first as the headquarters for the “Contrabands” (slaves who had escaped from the South) where it was known for being dirty and unhygienic, and after an outbreak of smallpox, the inhabitants were moved. Later during the war Duff Green’s row was used as part of the Old Capitol Prison, whose main building was north of East Capitol Street along 1st Street.

After the Civil War, the row became more salubrious, and in the picture here, you can see that a number of respectable businesses are located there, including Twitchell’s Capital Business College, established in the house in which Lincoln once lived.

Sadly, the historic nature of the buildings meant little when it came time to build the Library of Congress; they were all unceremoniously knocked down to make way for the Jefferson building, which opened in 1897.