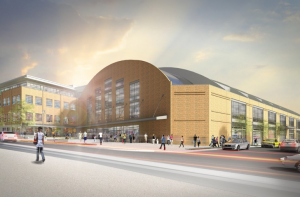 Concept drawing of the Uline Arena by Douglas Development Corp.

Update: We were contacted by REI a few days after this post went live. They released the following statement:

“We love the DC area and we are delighted there’s excitement about talk that we’re looking at Uline. We have been talking with the developer, but need to clarify that we have not finalized the decision. We need the perfect location to create a unique and inspiring space for our members and the community, so we will let you know when we have more details to share.” – Tim Spangler, senior vice president of Retail

Further email exchange with them was brief but they assured THIH that they are very interested in the Uline Arena and are still talking to the development, but when there is a concrete announcement, they will let us know.

It’s not exactly the Beatles coming back to play, but there are exciting things in store (get it?) for the Uline Arena, 1140 3rd Street NE, in the near future. The former Washington Coliseum, which has sat in disrepair and neglect for decades and has most recently served as parking lot and backdrop for a play about the old neighborhood, was acquired by Douglas Development in 2004. At last night’s ANC 6C Planning, Zoning and Environment committee meeting, the development company announced that REI will anchor the ground floor of the building. ANC PZE chair Mark Eckenwiler tweeted the happy news last night: