Lost Capitol Hill: The Tallest Equestrian Statue in the US

On April 27, 1922, the 100th anniversary of the birth of General and President Ulysses S. Grant, a new memorial to him was unveiled. While the centerpiece was an equestrian statue of him on his horse Cincinnati, the memorial also included two bronze castings showing – on the north – a cavalry charge, and on the south, an artillery unit in battle.

The action portrayed, and the realistic depiction of the chaos and fear of battle shown, contrasted with the almost despairing features of Grant, made the monument very different from the usual war memorials, which tended toward the heroic, and showing the bright side of victory.

But it was a point made by the New York Tribune on November 21, 1921 – 5 months before the unveiling – that describes what else made the statue unique: It was the largest equestrian statue in the United States, and, in fact, the second-largest in the world.

The largest equestrian statue was in Rome, where Vittorio Emmanuele II on horse is part of an enormous monument known as the “Altar of the Fatherland.” Also included are two quadrigas, and the tomb of the unknown soldier from the first World War.

Vittorio Emmanuele II plus his horse stand almost 40 feet tall, while Grant’s statue is a much more modest 17 feet tall. It would be another 50 years before a larger equestrian statue was built: an homage to Jose Gervasio Artigas, the “father of Uruguayan nationhood” stands almost 60 feet tall in Minas, Uruguay, northeast of Montevideo.

Nor is Grant still the largest in the United States: That honor goes to Don Juan de Oñate, whose statue in El Paso, Texas is almost twice the height of Grant’s. Oñate, a conquistador and explorer who founded numerous towns throughout the central United States, including Santa Fe, was known for his brutality, and the statue was not greeted with favor by all. Nonetheless, it remains the largest bronze equestrian statue in the world. 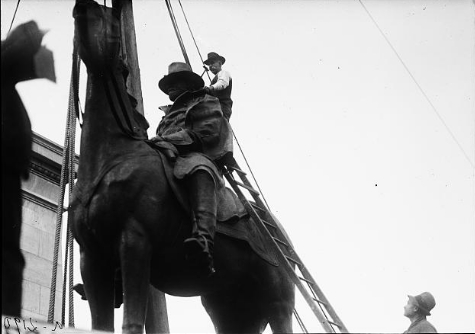 The Grant statue being put into place. Ca. 1920. (Library of Congress)

None of these statues, however, can match the current record-holder: The equestrian statue of Genghis Khan near Ulan Bator, Mongolia. This steel statue is an unbelievable 131 feet tall, almost as tall as the statue of Liberty, and similarly accessible from the inside – visitors can climb into the head to get a panoramic view of the area. Finished in 2008, it is the centerpiece of a 500 acre complex that includes a museum, a yurt camp, and a recreation center.

Even if it is no longer the largest equestrian statue in the US, the Grant statue remains a powerful memorial to a man, and to a time. Paired with the Lincoln Memorial at the other end of the Mall, it turns the entire space into a reminder of the Civil War. Even if it is overrun for much of the year by student groups being photographed in front of the Capitol, it is worth the visit.

4 responses to “Lost Capitol Hill: The Tallest Equestrian Statue in the US”