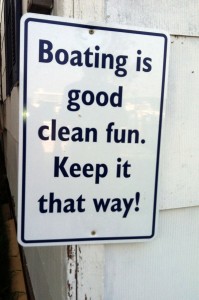 A sign posted at District Yacht Club, where Brown’s boat,Bullet Proof, is anchored. Photo by Tim Ebner/The Hill is Home

Capitol Hill is no stranger to political corruption. Usually, a Washington scandal unfolds at a famous hotel, in a smoky bar or behind the gates of a private residence.

But, for one of Washington’s most recent examples, you’ll need to head down to the riverbanks of the Anacostia, alongside the 11th Street Bridge, to the off-the-beaten-path location of the District Yacht Club.

“Let’s just say we have not enjoyed the publicity of Kwame either,” said District Yacht Club Commodore Eric Rowe.

Brown has been a member for several years and while Bullet Proof may have sunk his political career, it has put the District Yacht Club on the map – for better or for worse, Rowe said.

When news first broke that Brown committed bank fraud to buy the $50,000 boat, reporters and news vans descended on the small boat club. It reached the point where the club hired a private security company to keep eager press away.

Not even The Hill is Home on a recent tour was able to snap pictures of the now infamous boat. Yacht club policies restrict dock access to members and their guests only.

So for now, Bullet Proof sits idle in the water. “We’re not really sure what will happen to the boat,” Rowe said.

But, in the aftermath of this Washington scandal, he said the public may have the wrong impression of this laid-back, community-focused marina.

“Some assumed that because we’re a ‘yacht club’ that we’re some sort of exclusive elite organization, composed of luxury boat owners. The truth is that we’re all just ordinary people who love boating,” Rowe said.

The District Yacht Club and three other boating clubs make-up what’s known as Boathouse Row on the Southeast Anacostia waterfront. The marinas have been quietly tucked away for more than 50 years and represent a long tradition of boating on the river. One of the more notable clubs, The Seafarers Yacht Club, located at the end of M Street was founded as the first African-American boating club in the country.

At all four of the marinas there’s no fancy clubhouse or high-end perks. The District Yacht Club, founded more than 55 years ago, has a small unassuming boathouse, which originally served as  an army barrack before it was relocated to the boatyard.

Fees are also kept low for a reason, Rowe said. Boaters pay $100 for a monthly slip fee at the club, and the club’s upkeep and maintenance is voluntary to save on member costs.

The no-nonsense approach to boating appeals to many people, Rowe said. Boaters come from around Washington and from many different walks-of-life. Current and past members include lawyers, police officers and retired teachers.

The District Yacht Club also engages with the Capitol Hill community. They host annual open house events, and the club is considering a seafaring program that would teach boating operation and repair to students. According to Rowe, knowing how to fix a boat is an in-demand career skill, and the club has the ability to teach students on-site. Unlike most marinas in Washington, the District Yacht Club operates a maintenance yard with an automated railway track, which lifts boats from the water quickly and efficiently.

A view of the District Yacht Club Marina. Photo by Tim Ebner/The Hill is Home.

And, while Boathouse Row may be separated from Capitol Hill by the Southeast Freeway and the CSX railway track, Rowe said boaters, especially those on Capitol Hill, are starting to view the river as a destination.

The common issues of the Anacostia — it’s trash and stormwater runoff — still persist. Debris in the water can easily damage a boat or motor, but river improvement and clean-up efforts are taking shape, Rowe said.

Much of the stormwater runoff that now flows into the river will be captured after DC Water finishes construction on a combined sewer overflow system. The large tunnels being built will channel water so it can be treated before being released it into the water. Other environmental improvements, including the completion of the Anacostia Riverwalk Trail will add park area and bring foot-traffic from bikers and runners, Rowe said.

“We hope people see us as a place to come down and enjoy the water,” Rowe said. “Obviously it’s not just a place for Brown’s boat. We’re much more . . . We want the people that live and work here.”

The clubhouse at District Yacht Club. Photo by Tim Ebner/The Hill is Home.