On November 1, 1800, President John Adams was finally able to move into the White House. It was barely completed, but enough rooms had been finished for Adams and his wife to move in. The presidential residence was a distinct improvement over the boarding-house in which they had lived since moving to the new Federal capital. This move did nothing to help Adams’s vice president, who continued to live in a boarding house on Capitol Hill, and, in fact when Jefferson was inaugurated the next year, he set out from that very boarding house on his way to the Capitol to be sworn in.

Today, we will look at the history of this house, Conrad and McMunn’s Boarding House. Please follow the jump to learn more about its most esteemed resident.

When the federal government arrived in DC in 1800, there were only a handful of houses suitable for the incoming congressmen. Two of them were owned by one Thomas Law, who was one of the richest men in the new capital and was married to Elizabeth Parke Custis, granddaughter of Martha Washington. As his houses were located close to the Capitol, he agreed to rent them out to innkeepers  Conrad and McMunn, who ran them as a boarding house and a tavern, while Law moved to another house down on Greenleaf Point.

In her book The First Forty years of Washington Society, Margaret Bayard Smith describes the premises of Conrad and McMunn’s establishment thus:

Conrad’s boarding house was on the south side of Capitol Hill and commanded an extensive and beautiful view. It was on the top of the hill, the precipitous sides of which were covered with grass, shrubs and trees in their wild uncultivated state. Between the foot of the hill and the broad Potomac extended a wide plain, through which the Tiber wound its way. The romantic beauty of this little stream was not then deformed by wharves or other works of art.

On November 24, 1800, the National Intelligencer reported that,

Conrad and McMunn have opened houses of entertainment in the range of buildings formerly occupied by Mr. Law, about 200 paces from the Capitol in New Jersey Avenue, leading from there to the Eastern Branch.

Three days later, Thomas Jefferson, the vice president of the United States, arrived in the District of Columbia, and moved into this new boarding house. He was joined by some 30 others, all of them Democratic congressmen. In spite of his rank, Jefferson was relegated to the far (read: cold) end of the table, a place he accepted willingly.

It was partly from this love of nature, that he selected Conrad’s boarding house, being there able to enjoy the beautiful and extensive prospect described above. Here he had a separate drawing-room for the reception of his visitors; in all other respects he lived on a perfect equality with his fellow boarders, and eats at a common table.

Jefferson’s status did not change even after he was elected President by the House of Representatives on February 17, 1801; and so on March 4, 1801, he stepped out the door of his boarding-house and, accompanied by a few friends, walked the short distance to the Capitol. Jefferson, in contrast to his predecessors, chose to wear the clothes “of a plain citizen, without any distinctive badge of office” (National Intelligencer, March 6, 1801). 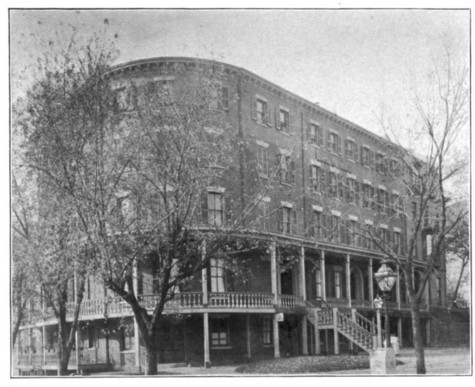 After a simple ceremony in the Senate chamber, Jefferson once again repaired to the Conrad and McMunn’s for lunch. On this occasion, he was offered a better seat at the table by Mrs. Margaretta Brown, wife of Senator John Brown of Kentucky, “but he smilingly declined it, and took his usual place at the bottom of the table.” (Smith)

Sadly, Conrad and McMunn did not do well in their enterprise, and in the fall of 1801, the Intelligencer reported that their goods were to be sold at auction to cover their debts. One of the two houses which constituted the boarding house was sold by Law in 1818; it was then owned for almost 40 years by Dr. Frederick May and his sons.  In 1857 it was purchased by Judge Joseph Holt, who became famous for having presided over the trial of Mary Surratt.

The other house continued to be used as a hotel by Pontius D. Stelle, and then from 1832 to 1871 it became the headquarters of the U.S. Coast Survey.

Both houses were eventually demolished to make way for Longworth House Office Building.