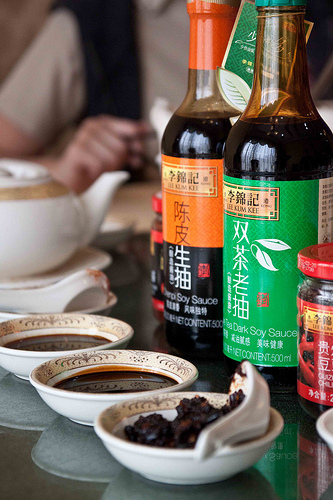 Nooshi isn’t a new to DC, but the Capitol Hill location is. The original spot (located downtown at  19th St NW) has always been a reliable lunch or dinner stop if you work nearby, but as this has never been the case for me, I’ve only been there a few times, despite always having good experiences there.

So when the Barracks Row location opened I was excited to try it, as both sushi and rooftop decks are two things I can generally support. And you won’t be able to miss the new location, just look for the colorful mural (that was the subject of some earlier controversy) painted on the side of the building that houses Tash and Nooshi.

My party of two arrived pretty early for a Saturday night around 6:30p, and were seated right away in the front dining area, a great place for people watching, but also a high traffic zone (I’d suggest one of the booths or tables near the back, or the top floor if you want something a little more private).

We started off with the vegetable spring rolls (2 in an order) which were hot and crispy, and not greasy, which can sometimes be the case with spring rolls. They were served with a sweet and sour sauce.

For dinner I normally love their soups, but as this was a hot summer evening, I opted for sushi, which was good. Their menu offers a few vegetarian rolls, I ordered one and it was flavorful for not being a traditional sushi roll.

My dining companion ordered the Crispy Garlic Shrimp, which were surprisingly light, despite having been fried. The coating wasn’t too thick and they had a garlic flavor that wasn’t overpowering. We also saw a couple of tables around us order the whole duck, which was carved tableside and smelled delicious.

I can’t comment on the cocktails, as we ordered water and a couple of Sapporos, but the drink menu had a bunch of frozen drinks that looked good.

After dinner, we walked upstairs to check out the roofdeck. It has a sliding glass door that opens up to the outdoor space, a major plus for any restaurant on the Hill and a great place to enjoy one of the aforementioned frozen concoctions on a summer night.

As far as sushi on the Southeast side of the Hill goes, its definitely worth giving Nooshi a shot, and your non-sushi loving friends can rest assured the menu has plenty of other options.

By Lauren Torlone      No Comments